Gold in the Pan 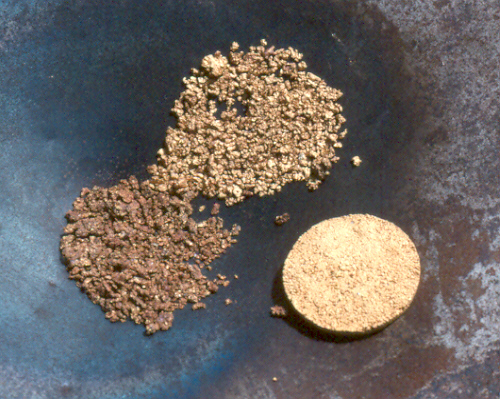 This is the classic perception of gold in its raw state: grains and nuggets of native gold won from the gravels of a stream or river. Gold, as a relatively unreactive precious metal, forms comparatively few minerals (actually more than 20 species, but most of them very rare) and is most often encountered as native gold, or as "invisible gold" combined within minerals dominated by other elements, such as the sulphides pyrite and arsenopyrite. Native gold may be more than 99 percent pure, but is most often an alloy with appreciable silver and small to trace amounts of other metals, such as copper, iron and palladium.

This gold was panned from the watershed of the Cuyuni River in northwest Guyana. The Guiana shield of northern South America has many gold workings spread across several countries: Venezuela and Brazil, Guyana (former British Guiana), Suriname and French Guiana. Mining in the colonial and independence periods extends back more than 100 years. The latest wave of exploration has been sustained over the past twenty years, and today involves firms such as StrataGold Corporation and Sacre-Coeur Minerals. Recent successful drill programs are often featured in trade journals (e.g., Beales, 2004; Anon, 2007). The cookie-like disc of gold (approximate diameter 4 cm) was probably agglomerated with the use of mercury, an old method used in many small-scale mining operations, including the Guyanese `pork knocker' workings (photo taken in 1996). The importance of gold in the Guyanese economy rose relative to alumina and other exports in the late 1980s and 1990s (Jacobson and Kratochvil, 1998). The challenge is to win the gold in the local waterways and bedrock without poisoning the environment, whether by mercury (small, artisanal operations) or the cyanide solutions used in industrial-scale heap-leach gold recovery.

The bedrock in the region is underlain by metavolcanics and metasediments of the late Proterozoic Cuyuni Formation, including sandstones, conglomerates and volcanics, intruded by several granitoid complexes, such as the Aurora batholith, and by late diabase dykes. The local rocks, such as greywacke and tuff, are subject to hydrothermal alteration with abundant quartz veins, pyrite and carbonate. The strata are folded and sheared, and cut by late intrusives such as quartz porphyry and granitic pegmatite. As is typical of gold vein deposits, a variety of host rocks and structural controls may attract and channel appreciable mineralization (Walrond and Persaud, 1993).