from the Palni Hills charnockite massif, Kodaikanal, Tamil Nadu, south India,
with some notes on gold in granulite terranes in Africa and Australia.

in Nunavut Territory, Canada, while others are those shown below, from Kodaikanal.

This Rock of the Month provides a brief description of samples from the Bear Shola locality at Kodaikanal, and also summarizes work on two other areas in granulite facies terranes which contain not only sulphides but also gold mineralization, a rare circumstance. These featured localities are Renco (Zimbabwe) and Griffin's Find (Western Australia), both of which have been mined for gold. 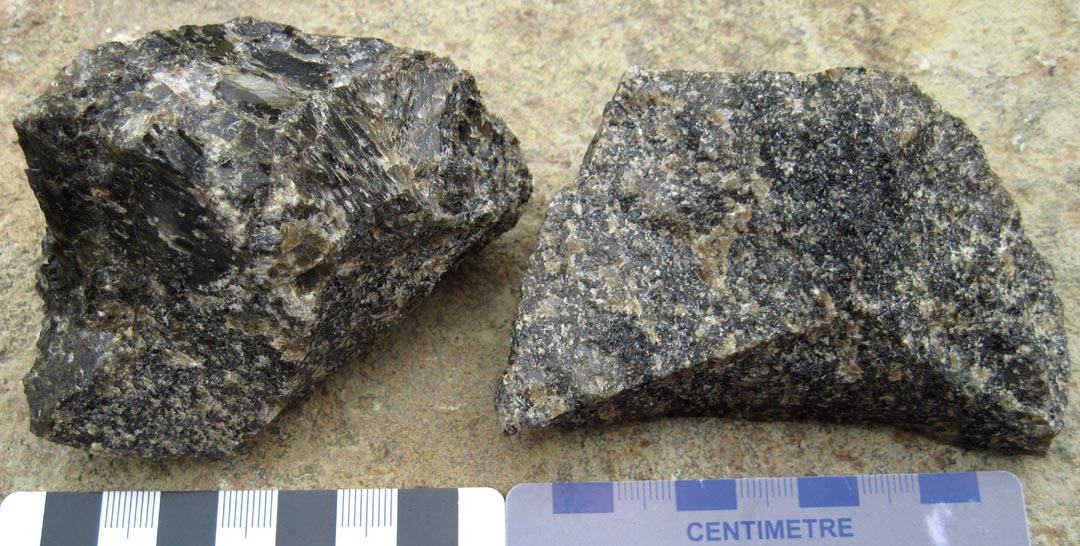 Above: hand specimens (1300B at left, 1304 at right) of rocks associated with the sulphide-rich sample (1300C) figured in the photomicrographs. The coarse to pegmatitic charnockite veins and segregations (left) seem to have the same mineralogy as the massive host charnockite (right).

It is understood that deformation at the end of the Archean led to the development of north-south strike-slip shear belts in what is now southern India. CO2-rich fluids purged the deep crust to form granulites, while rise of H2O-rich fluids led to partial melting at intermediate crustal depths (Drury et al., 1990). The Kodaikanal massif is the largest upland block of granulites in south India (Harris et al., 1990; Brown and Raith, 1996). A regional Eocene weathering surface is distinguished in the Palni (Kodaikanal), Nilgiri and Shevaroy Hills, sloping from 2200 m to 1600 m elevation, west to east (Gunnell, 1998).

Hgh-T granulites formed at 8.3±1.0 kbar, 760±40°C, and , are restricted to the charnockites and mafic granulites on the north slopes of the Nilgiri Hills to the north. They indicate that late Archean crust had a minimum thickness of roughly 30 km. The Kodaikanal massif includes the Annamalai, Palni and Cardomom Hills, rising to 2800 m. Massive and homogeneous charnockites in the Kodaikanal area are in subvertical contact with a thick sequence of metasediments, "the contact zone coinciding with the eastern edge of the upland massif" (Harris et al., 1990).

Unusual mineralogy, offering a key to the evolution of the deep continental crust, is part of the reason that Kodaikanal is such an interesting place geologically. One example is the magnesium aluminosilicate sapphirine, in textures indicative of rapid uplift and cooling (Sivasubramanian et al., 1991; Mohan and Windley, 1993; Brown and Raith, 1996; Raith et al., 1997); another is cordierite (Prakash, 1999). The boron-bearing kornerupine-prismatine series has been documented further south (Sriramguru et al., 2002). The regional metamorphic peak is estimated to have been near 800°C and 8 kbar (Mohan and Windley, 1993), or as high as about 900-1000°C and 12 kbar (Brown and Raith, 1996). Similar high-P,T conditions are suggested by the metamorphic petrology of the Kambam valley, south of the Kodaikanal massif (Anto et al., 1999; Sriramguru et al., 2002), and in the Palghat Gap on the north edge of the Kodaikanal charnockite massif (Ravindra Kumar and Chacko, 1994). Some of the highest temperatures in the wider region may reflect the intrusion of postulated "C-type" charnockite magmas (Chacko et al., 1998). The rocks of the Palni Hills display 1) initial high-pressure assemblages, 2) evidence of isothermal decompression, with rapid ascent of granulites to mid-crustal levels, 3) development of late biotite at a stage of near-isobaric cooling and 4) a final period of near-isothermal exhumation as late biotite partly breaks down. Stages 1-3 are thought to coincide with early Proterozoic metamorphism in the Nilgiri, Biligirirangan and Shevaroy Hills to the north, while exhumation of granulites from mid-crustal levels (stage 4) occurred only in the early-Paleozoic Pan-African event (Raith et al., 1997). The full chronology and metamorphic history of the region is beyond the scope of this small vignette (see, e.g., Jayananda et al., 1995; Anto et al., 1997).

The Renco gold mine in Zimbabwe is peculiar in its location in granulite-facies, charnockitic rocks, as opposed to the familiar greenstone belt situations for gold mineralization (Bohmke and Varndell, 1986). The Renco ore is very fine grained (60% of gold particles are <14 µm). The native gold has associated Bi- Cu- Fe sulphides (Anon, 1982). The sulphides are pyrrhotite with lesser chalcopyrite and subordinate pyrite, plus accessory sphalerite, cubanite and molybdenite. Native bismuth and Au-Bi alloys have been observed. The pyrite is of two generations: early pyrite with inclusions of pyrrhotite and chalcopyrite and late euhedral pyrite with overgrows primary sulphides and mylonitic foliations (Kisters et al., 1997, 1998; Kolb et al., 1999). The Renco ore lies in high-temperature shear zones, known locally as reefs. It is the most prominent of a number of Au occurrences in the so-called Nyajena gold field. Average mining grade in the 1990s was about 5.5 ppm Au and annual production via underground mining was about 1.5 tonnes Au (Kisters et al., 1997, 1998; Kolb et al., 1999). The mine, in the northern marginal zone of the Limpopo belt, is the only Au deposit known in the Limpopo belt, and one of a very few in the world in granulite facies rocks like enderbite and charnockite. The host enderbite was intruded at 2570 Ma. Pyroxenite dykes were intruded near 2400 Ma, probably associated with the Great Dyke. The major auriferous mineralization is dated at about 2000 Ma, and occurred under greenschist facies conditions of regional metamorphism, <400°C, postdating high-grade metamorphism, and appears linked to shearing in the Limpopo belt (Blenkinsop and Frei, 1996). Mineralization occurred during retrograde metamorphism and rehydration of granulites under amphibolite conditions, at ~650°C. The gold occurs mainly as native gold but is spatially associated with sulphides. The alteration assemblage includes garnet, biotite mica, K-feldspar and quartz ± siderite. Pressure drops during brittle deformation triggered Au deposition (Kolb et al., 1999).

The Griffin's Find gold deposit in Western Australia is the highest-grade deposit in lower granulite facies host rocks. It lies near the southwest edge of the Archean Southern Cross province, in a small greenstone remnant of felsic gneiss and metatholeiitic and metasedimentary host rocks, in upper amphibolite to lower granulite facies granitoid-gneiss terrain (Fare et al., 1990). The deposit lies 14 km W.N.W. of the wheatbelt town of Lake Grace, in an area of eroded late Cretaceous and Tertiary laterite soils overlying a basement of Archean granite and gneiss (Maxlow, 1990). The original find dates to 1957. The peak metamorphic conditions have been estimated at about 700-750°C and 6±1 kbar, consistent with the absence of partial melting (Fare et al., 1990). Immobile element data indicate that the ore zone is hosted by highly altered metasediments. The ore includes quartz-clinopyroxene veins, with adjacent alteration to quartz, clinopyroxene ± manganiferous grossular garnet. The sulphide content includes pyrrhotite in the wallrock and arsenopyrite and loellingite in the veins. Retrogression of the ore assemblages is minimal, indicating that the mineralization is not retrograde, and the ore textures are consistent with synmetamorphic, syntectonic timing, estimated to be within 50°C of the synmetamorphic peak. It appears from this analysis that Archean lode Au deposits can form at depths from >20 km to <5 km. Local rocks display granoblastic textures typical of the granulite facies, the mineralogy including orthopyroxene (hypersthene), clinopyroxene, hornblende and red-brown biotite. Arsenides and sulphides form an integral part of the host rock fabric and may be enclosed by ilmenite, sphene (titanite) and sillimanite, suggesting that they predate the high-grade regional metamorphic event. Retrograde metamorphism is marked by pumpellyite, prehnite, scapolite, sericite in feldspar, and chlorite in ferromagnesian minerals. This retrogression postdated peak metamorphism, and thus was not directly linked to mineralization (Maxlow, 1990). Accessory ore minerals include galena, native arsenic, electrum and tetrahedrite (Tomkins and Grundy, 2009). Fluid inclusions in vein quartz are mostly low-salinity, of variable composition, and most could not have been in equilibrium with the mineral assemblage in the vein and the wall rock (Ridley and Hagemann, 1999). The latest detailed published study, by Tomkins and Grundy (2009) estimates peak metamorphic conditions were 820-870°C and circa 550 MPa. Partial melting of silicates took place. Gold and sulphides are in textural equilibrium with silicates like cordierite, showing that significant fluid influx and associated retrogression could not have occurred after peak metamorphism. Thus mineralization occurred prior to peak metamorphism, probably under greenschist facies conditions, like other orogenic Au deposits. Re-logging of historical core at the former Au mine, which produced 55,000 oz gold, shows potential for more ore below the old mine (Watkins, 2011). Two shallow open pits operated in the 1980s, and the find lies in a 3x1-km soil anomaly for gold and arsenic.

The modern conception of Archean lode gold deposits sees gold hosted in a wide range of host rock types and structural traps, in terranes of greenschist to middle amphibolite facies metamorphic grade. The broad concept is one of the fluxing of a range of metals and carrier phases in a hot, dry lower continental crust, which are then flushed to shallower, cooler levels on crustal-scale deep regional structures, where they are deposited. The transported components include gold, boron, CO2 and sulphur.

Anto,KF, Janardhan,AS and Basavalingu,B (1999) Metamorphic history of calc-silicate lithologies from the Kambam valley, Tamil Nadu and its bearing on the evolution of the southern granulite terrain. J.Geol.Soc.India 53, 27-37.

Anto,KF, Janardhan,AS and Sivasubramanian,P (1997) A new sapphirine occurrence from Kambam valley, Tamil Nadu and its possible relation to the Pan-African tectonothermal event. Current Science 73 no.9, 792-796.

Blenkinsop,TG and Frei,R (1996) Archean and Proterozoic mineralization and tectonics at the Renco mine (northern marginal zone, Limpopo belt, Zimbabwe). Econ.Geol. 91, 1225-1238.

Gunnell,Y (1998) The interaction between geological structure and global tectonics in multistoreyed landscape development: a denudation chronology of the South Indian shield. Basin Research 10, 281-310.