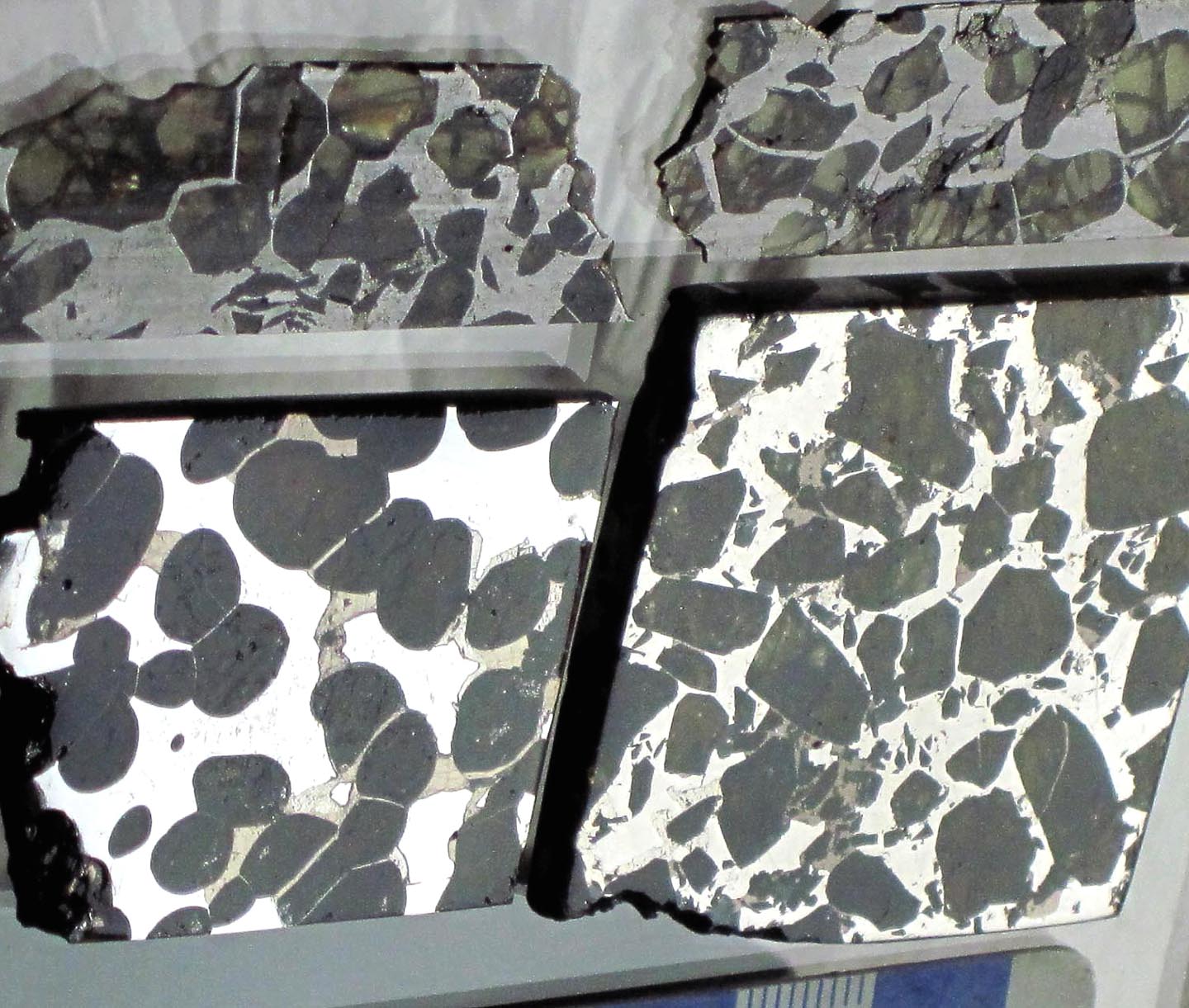 Figure 4. Two thin slices of coarse pallasite facies of Seymchan, unpolished, perfect material for preparation of polished mounts and thin sections. The left-hand half of the top-left slice furnished the mount for microprobe work. Note thin metal veinlets between the olivine crystals. These and other samples of Seymchan can be compared with polished slices of Brenham (lower left) and Brahin (lower right). Immediate provenance of the two rough-hewn slices of Seymchan: Blaine Reed; Brenham and Brahin: KD Meteorites.

Olivine appears to be essentially unzoned, average composition Fa11.6, Fe/Mn~41, with Ni always <110 ppm, the detection limit. This very low nickel content is well-known in pallasites. In particular, an ion microprobe (SIMS) study of olivine in seven pallasites (Reed et al., 1979) estimated the Ni contents in the olivine of seven pallasites at 22-41 ppm, significantly lower than then-published results by the less-sensitive electron microprobe. Their samples included olivine from Brenham, Eagle Station and Springwater, as well as terrestrial olivines from St. John's Island (Zabargad), Rhum in Scotland and the Bushveld complex in South Africa. The low Ni content of the pallasite olivines can be taken as an indication that the olivine has equilibrated with the iron phase, which served as a collector for most of the nickel. The metal phase appears to be a better "scavenger" of nickel than iron sulphides, which in most terrestrial mafic intrusions are analogous to meteoritic metal as "collectors" of less-common metals.

Kamacite The kamacite averages 6.59 wt.% Ni and 0.50 wt.% Co, plus traces of Si, S and P. Note that the nickel value is about 70% of published analyses for bulk metal. This reflects a) appreciable Ni in the Ni-rich alloy taenite in the iron meteorite facies of Seymchan (see Harju et al., 2011; and the SEM discussion, below), and b) additional Ni in the Ni-rich phosphide. A traverse of a mm-scale mass, and analyses in thin veinlets between olivine, suggest that the metal is quite homogeneous. A small (<0.2 mm) metal bleb hosted by olivine was relatively Co-rich (0.59%). 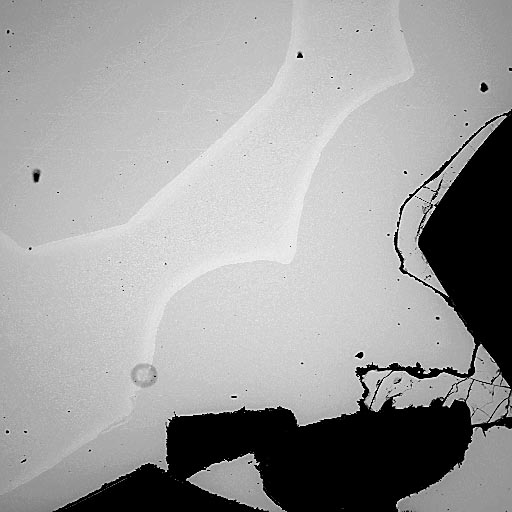 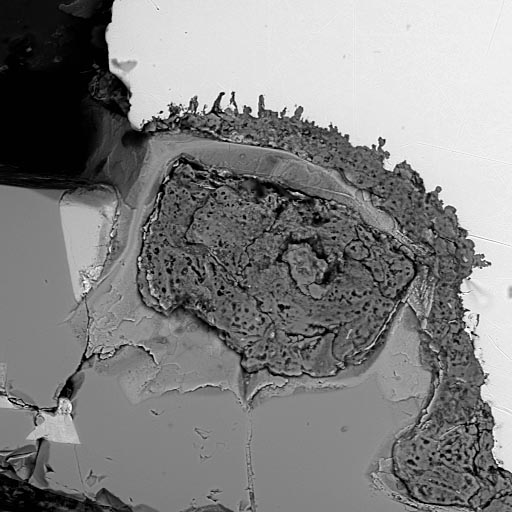 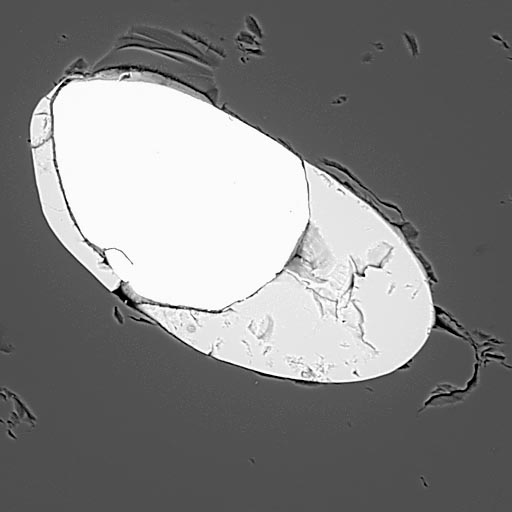 Figure 5. Three BSE images of select features. Left: This image shows a taenite lamella in a matrix of kamacite. On the right, a typical occurrence of the phosphide schreibersite, with a cracked appearance, decorates the contact of kamacite with olivine. Note the zonation in the taenite, clearly visible in backscattered electron imagery, enhanced photographically for clarity. The bright margins of the taenite reflect a higher content of the heavier atom (Ni, element 27, in Fe, element 26). There is an M-shaped diffusion profile, with perhaps 3 times as much Ni at the margins of the Ni-rich lamellae as in the host kamacite. The small round object at the lower left is an artifact, probably a bubble induced in the carbon thin film by the electron beam. Field of view 2.7 mm. Centre: a study in partial terrestrial alteration of the metal (kamacite, white) and chromite (medium grey, lower centre and left of image). Against the kamacite is a thin film of pitted Ni-bearing goethite. The rectangular pitted area against chromite is also goethite, with both Ni and Cr contents. Field of view 0.27 mm. Right: a rounded kamacite bleb with a rind of troilite, in olivine. Field of view 0.20 mm.

Here are some initial thoughts on the diversity of textural features in the illustrated material. Photographs of polished slabs of pallasites are quite instructive (see Norton and Chitwood, 2008, amongst many publications and web sites).

A. Some, such as Albin, Huckitta and Eagle Station, display angular olivine, evidently fragments in breccia cemented by a metal matrix. The brecciation may reflect an impact event, consistent with the non-magmatic, impact-related origin that has been suggested for IIE irons. At the least, a dynamic magmatic environment is indicated, as in a rapidly-convecting magma chamber or conduit (so-called taxite fabric, in the terminology used in nickel exploration). Most pallasites are relatively sulphur-poor, and thus troilite and other sulphides are minor phases. Some, such as Newport, contain native copper, further evidence of the low S content (Buseck, 1968). A specimen photographed at the Tucson show in February 2014 (Fujihara, 2014) shows a further variant: an etched face of metal enclosing rounded, heiroglyph-like chromite inclusions.

B. Others, such as Springwater, are notable for their smoothly rounded olivines, also in metal, but with a texture more reminiscent of liquid immiscibility (e.g., cooking oil with a little water, vinegar or milk). Some of these olivines are fairly coarse, 5 mm or more, as in Brenham, Esquel and Fukang. Some of these olivines appear "floating" in metal and thus are not constrained by adjacent olivines. The large olivines are often subhedral to subrounded in crystal habit. These seem to be formed in a more sheltered setting that the breccias (?).

Seymchan seems to display both angular and rounded olivines in different volumes of the pallasite facies. The "breccia" form predominates in the material I have seen, but some smaller volumes contain more rounded olivines (e.g., see first photo, above), if less perfectly spheroidal than may be seen in Springwater.

In summary, some pallasites, including Seymchan, display more than one, and as many as three textural "facies". Each individual meteorite, even the largest, represent at most a tiny volume of its asteroidal parent body. All samples of each meteorite were originally within centimetres to metres to perhaps (Canyon Diablo?) tens of metres of each other, a very small compass compared with the multi-kilometre scale of many terrestrial intrusions. The only exceptions may be regolith breccias, which can include fragments hurled by impact across the original surface of the parent body.

I have over 250 articles on pallasites to hand and, given time, may find a perfect explanation of the textural variation shown on those pages. Right now, the state of the art may be expressed by Scott et al. (2010), an elegant blend of science and fine illustrations. Evidence such as discrepancies in cooling rates between pallasite metal and iron meteorites argues against the classic explanation of pallasites as accreting at the boundary of a metallic asteroidal core and a silicate-dominated mantle. Instead, many pallasites and some classes of irons may have formed as melt pools at and near the asteroidal surface. Some of these melts may have penetrated deep into the crust of the parent body, as fracture-hosted breccias. Helpful analogies to these processes are probably at hand on Earth. Obvious examples include impact structures, particularly the sulphide-rich Sudbury igneous complex and its fractured basement, in Canada, and the giant rift-related intrusions of Noril'sk and Talnakh in Siberia. Back on the small scale, it seems appropriate to analyse samples of both "breccia" and massive-iron facies of Seymchan, to compare with the coarse-facies material analysed here. There's a lot to explore in a meteorite find of this scale!

Scott,ERD and Taylor,GJ (1990) Origins of pallasites at the core-mantle boundaries of asteroids. Lunar and Planetary Science 21, 1119-1120.

or the broader "Rock of the Month" Archives!