Pyritic gold ore from the Williams Mine, 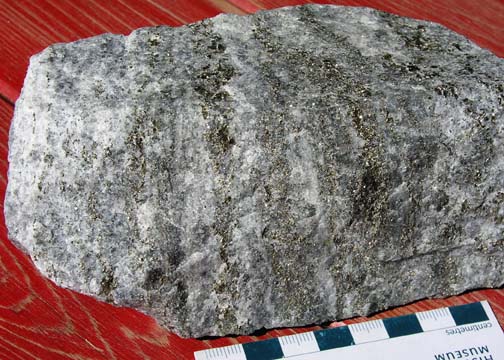 A pyrite-rich feldspathic Au ore from the large, late Archean Hemlo gold deposit, a modern-day gold find containing more than 600 tonnes of the precious metal. This ore is from the Williams mine, the westernmost of three mines developed on the major orebody. Loose in 5 x-cut, 9215 E level. Sample 1590, collected 14 March 1994. The 9215 level displayed a wide range of host-rock and ore types, including biotite, sericite and green-mica schists; veinlets of quartz-carbonate and of pyrite; felsic porphyries with assorted colours and degrees of deformation; banded feldspathic rocks; calc-silicate rocks; quartz lenses with tourmaline-rich selvages, and pyritic and baritic gold ores. This is a striking banded specimen with abundant sulphide (circa 12%) in foliae 2-10 mm thick. Traces of unusual bright green sheet silicate (barian mica?) occur in the siliceous matrix. Probably a relatively high-grade ore (several grams/tonne gold?).

The Hemlo deposit has attracted much attention from industry and academics alike. There are numerous reasons for this. It is a "world-class" deposit, and as cynics like to observe, such discoveries tend to generate world-class lawsuits. It was found adjacent to Highway 17, the southern arm of the Trans-Canada Highway, and thus many geologists had travelled unknowing beside and over it. The geology was such that a raft of mutually incompatible ideas was floated to account for the deposit's origin. Research on unusual aspects of the chemistry and mineralogy of the ore fuelled the debate. A measure of consensus was eventually achieved. Rather than write many more pages on the deposit, a selective bibliography is appended, less than 10 percent of MINLIB records on Hemlo. The choices include articles which are variously representative, timely, detailed and influential in their coverage of aspects of the Hemlo gold camp and its ore types.

The scale and pace of mining have increased enormously since the discovery of other top-rank hard-rock gold camps, such as Timmins (Porcupine) and Kalgoorlie. Thus it is rather disconcerting for some of us in the industry to see the decline of the mining camp, like an old friend, having seen it rise, from the initial excitement of the discovery, to the status of a major mining centre, and now to see the inevitable approach of mine closure. The central Golden Giant mine was closed in January 2006, and the David Bell and Williams mines are scheduled to close in 2009 and 2011, respectively.

Selective Chronological Bibliography, Research on the Hemlo Area and its Ores

Muir,TL (2003) Structural evolution of the Hemlo greenstone belt in the vicinity of the world-class Hemlo gold deposit. Can.J.Earth Sci. 40, 395-430.

Tomkins,AG, Pattison,DRM and Zaleski,E (2004) The Hemlo gold deposit, Ontario: an example of melting and mobilization of a precious metal-sulfosalt assemblage during amphibolite facies metamorphism and deformation. Econ.Geol. 99, 1063-1084.