from the Grenville province of Quebec 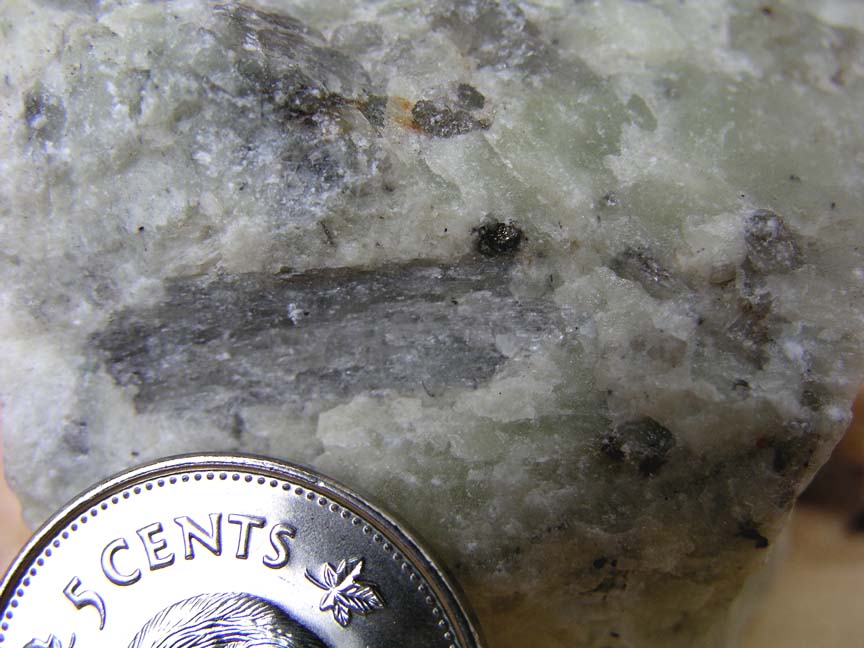 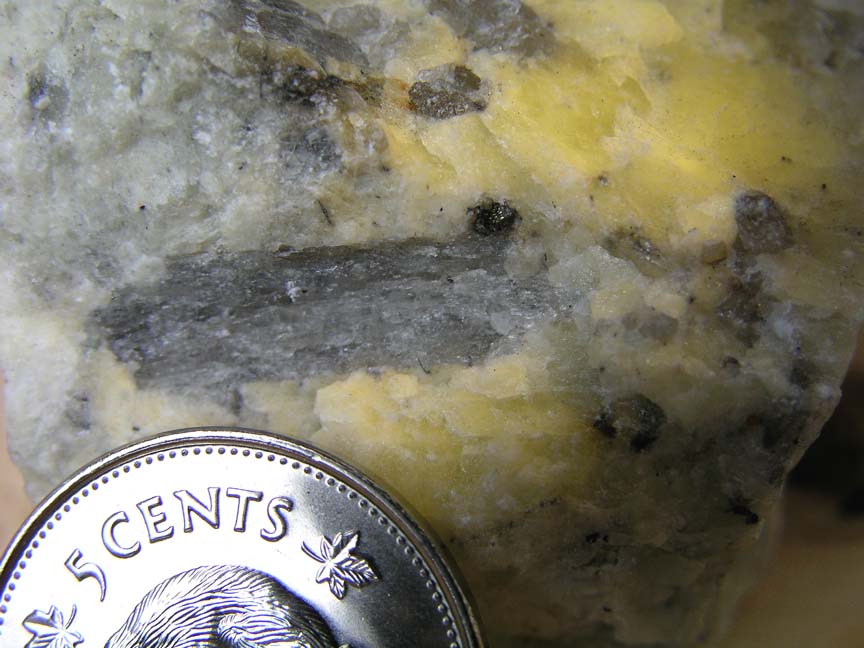 The white mineral is scapolite. This sodium-calcium silicate often forms as an alteration product of plagioclase feldspar. It displays strong bright yellow luminescence in long-wave ultraviolet light (right). The Canadian 5-cent coin is 21 mm in diameter.

Scapolite from the mid-Proterozoic Grenville province of southern Quebec, Canada. The sample and the compact 9-LED long-wave ultraviolet lamp were both supplied by Grenville Minerals of Kingston, Ontario. This sample contains elongate prisms of grey diopside, a clinopyroxene. It also contains traces of very fine-grained sulphides, apparently chalcopyrite, pyrrhotite and pyrite (e.g., dark granule at top right margin of the principal diopside prism). The locality is near the town of Grenville (Grenville-sur-la-Rouge) which lies on the left (northern) bank of the Ottawa River downstream of Ottawa, opposite the larger Ontario town of Hawkesbury.

Scapolite, like its sometime progenitor plagioclase, is a solid-solution series variable in composition between sodium- and calcium-dominant endmembers. Conveniently, and also like plagioclase, the composition of the mineral may be estimated by optical petrography (by birefringence in the case of scapolite, and by the orientation of twin laws in the case of the feldspars) This sample is reportedly closer to the calcic end-member, meionite. The name wernerite is an old synonym for scapolite, originally named in 1800 for A.G. Werner, from a locality at Arendal in southern Norway. Wilsonite is another discredited synonym, an altered scapolite. Scapolite occurs in a range of settings in the Grenville in Quebec, including metagabbros and anorthositic rocks, gneisses, nepheline-bearing rocks, and assorted skarn deposits.

According to the Fluorescent Mineral Society (see below), roughly 15% of fluorescent minerals can be excited with a long-wave UV light, and 90% by a short-wave UV source. A few of the minerals that may respond to SW UV light include scheelite and eucryptite. Other species that may fluoresce in LW UV light are colemanite and sphalerite. Both SW and LW UV light may generate a good reaction with some kinds of agate and chalcedony, hyalite opal, hydrocarbons, carbonates such as calcite and aragonite, some of the zeolite assemblage such as apophyllite, gyrolite and pectolite, and numerous uranium minerals. Robbins (1994) provides a catalogue of 460 fluorescent mineral species. Some mineral localities are especially noted for fluorescent species, e.g., Franklin, New Jersey and Langban in Sweden, as well as Mont St. Hilaire in Quebec. Not all specimens of a given mineral will fluoresce, since the effect depends in large part on invisible controls, such as the contents of key trace elements in the crystal.