from Rustenburg, in the Bushveld Complex of the Transvaal, South Africa 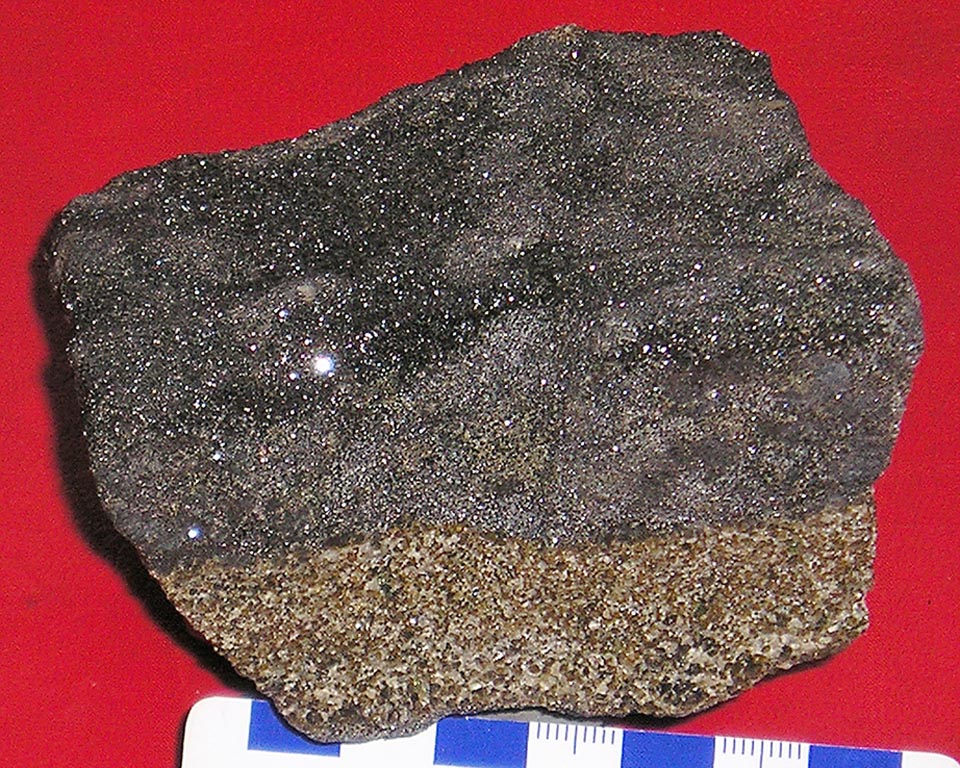 "Rock of the Month # 60, posted for June 2006" --- Sample 1731, showing friable, granular chromitite of the UG-2 Reef from Rustenburg Platinum Mines (Breskop shaft). Collected in situ on 13 November 1995 and donated by Mark Rebagliati. This sample displays the basal 2 cm of the UG-2 chromitite, in sharp contact with a footwall "pyroxenite", in this instance a granular norite of 1-mm grain size. The chromitite is composed largely of the chrome spinel, chromite, while the underlying norite is also a simple rock, apparently containing roughly 60% yellow-brown orthopyroxene, 35% plagioclase feldspar, and 5% brighter green clinopyroxene. The nature of chromite and the geological context of this sample are described briefly below.

Chromite, is the principal ore mineral of the metal chromium. It is a cubic oxide of the spinel family, ideal formula FeCr2O4. In practice, the more common occurrences of chromite include significant deviations from the simple ideal, especially the partial substitution of Mg for some of the Fe (FeII), and of Al and FeIII for some of the Cr. Black and shiny, it often goes unseen in hand specimen, individual grains commonly <0.25 mm in diameter. It is nevertheless a very common accessory mineral in a range of igneous rocks, such as basalts, gabbros and their metamorphic equivalents, and is also found as small, equant grains in many if not most ordinary chondritic meteorites. The black layer in this sample consists of perhaps 80 volume percent chromite, and is termed a chromitite. The balance is largely plagioclase feldspar and bronzite (an orthopyroxene), plus minor interstitial clinopyroxene and biotite mica, and quite possibly small grains of platinum-rich minerals.

The Bushveld complex is the world's largest mafic-ultramafic layered intrusion. It underlies an area of roughly 66,000 km2, rivalled only by the >50,000 km2 of the Dufek intrusion in Antarctica. Diverse igneous rocks of iron- and magnesium-rich compositions host the majority of world's resources of metals such as nickel (Ni), chromium (Cr), vanadium (V) and the six platinum group elements (PGE), of which platinum (Pt) and palladium (Pd) are the best-known. Rhodium (Rh) and gold (Au - the most famous precious metal is not one of the PGE) are often included in estimates of PGE resources on the Bushveld. The lesser PGE are iridium (Ir), ruthenium (Ru) and osmium (Os). The igneous layering exposed in outcrop and drillcore has been minutely studied since Hans Merensky's 1924 discovery of the platinum-rich "reef" of layer that bears his name. Soon after, and somewhat deeper down the igneous stratigraphy, the highest important example of a series of chromite-rich reefs was discovered. It is known as the UG-2 (or UG2) Reef. The UG-2 is overlain by a noritic- anorthositic sequence 10-200 m or more thick, capped by the Merensky Reef. Until recently the more complex metallurgy of the UG-2 has slowed down its exploitation relative to the Merensky Reef. It is nevertheless minutely documented: a MINLIB bibliographic search of some 700 mostly public-domain publications on the Bushveld complex included roughly 1 item in 7 describing aspects of the UG-2 (e.g., Maier and Eales, 1997; Cawthorn et al., 2002).

The UG-2 is found in both eastern and western limbs of the complex, and the two famous reefs are destined to be the major suppliers of platinum, in particular, for the forseeable future. The Merensky and UG-2 reefs host some 90% of the world's known PGE reserves and produce roughly 80% of the Pt and 20% of the Pd mined each year. The UG-2 is quite thin, 75-150 cm from top to base, typically with about 7 parts per million by weight of (Pt + Pd + Rh + Au). This is a rich grade, compared with most PGE-bearing deposits, and combined with the great lateral extent of the gently- dipping reefs explains the primacy of the two principal reefs. Furthermore, the Bushveld ores are relatively rich in Pt, whereas elsewhere in the world many deposits show higher proportions of the generally-cheaper Pd. Curiously, the Cr2O3 content is quite modest, generally near 32 weight percent, and without the high PGE "coproduct" value, the UG-2 might not be an economically viable chrome deposit.

MAIER,WD and EALES,HV (1997) Correlation within the UG2-Merensky Reef interval of the Western Bushveld complex, based on geochemical, mineralogical and petrological data. Geol.Surv.S.Africa Bull. 120, 56pp. plus appendices.