Based on 20 observations in Seymour township, Northumberland county, southeast Ontario, 1999-2021,
including 4 personal observations of the great grey owl and 16 notes on other local sightings of 6 owl species.
Note that, as with the bald eagle, I have compiled more third-party accounts than personal observations,
and hope the composite image speaks to owl occurrence in the township,
subject to the limitations of sparse data over two decades.

All our sparse owl sightings and recorded reports are within or flanking the winter season, from 20 November through to some time in the second or third weeks (08-20) of April. Worse yet, five of 20 reports are just "owl", species unknown.

The great grey owl is an irregular visitor to southeast Ontario, driven presumably by harsh winter weather or food scarcity in its typical northern and northwestern range. This happened in early 2005, with 4 sightings by the writer, 22 January to 17 February. There were numerous reports (only 6 compiled here) that winter, and at least 2 injured owls were treated by local veterinarians.

In Peterborough county, to the northwest, the great grey owl was known in the 1820s, but may have fallen prey to idle gunners in the settlement era (Sadler, 1983, p.96 and cover photo). The Breeding Bird Atlases of Ontario (Cadman et al., 1987, pp.210-211; 2007, pp.298-299) affirm that the great grey owl is most common today in the boreal forest, especially east-west across the north shore of Lake Superior. It is seldom seen in a typical year, despite the fact that it is "active during daylight, frequently feeds in open habitat, and is usually quite tame" (Cadman et al., 1987, p.210).

The great horned owl is probably present year-round, but is seldom seen, though it is a memorable bird when seen close-up! Two local instances are noted here, in December 1999 and February 2015. Unlike the great grey owl, the great horned owl breeds widely through southern Ontario, as well as further north and west. It is relatively conspicuous and often heard. Pairs begin to form in mid- to late autumn, and the birds call regularly in late fall and early winter (Cadman et al., 2007, pp.292-293) 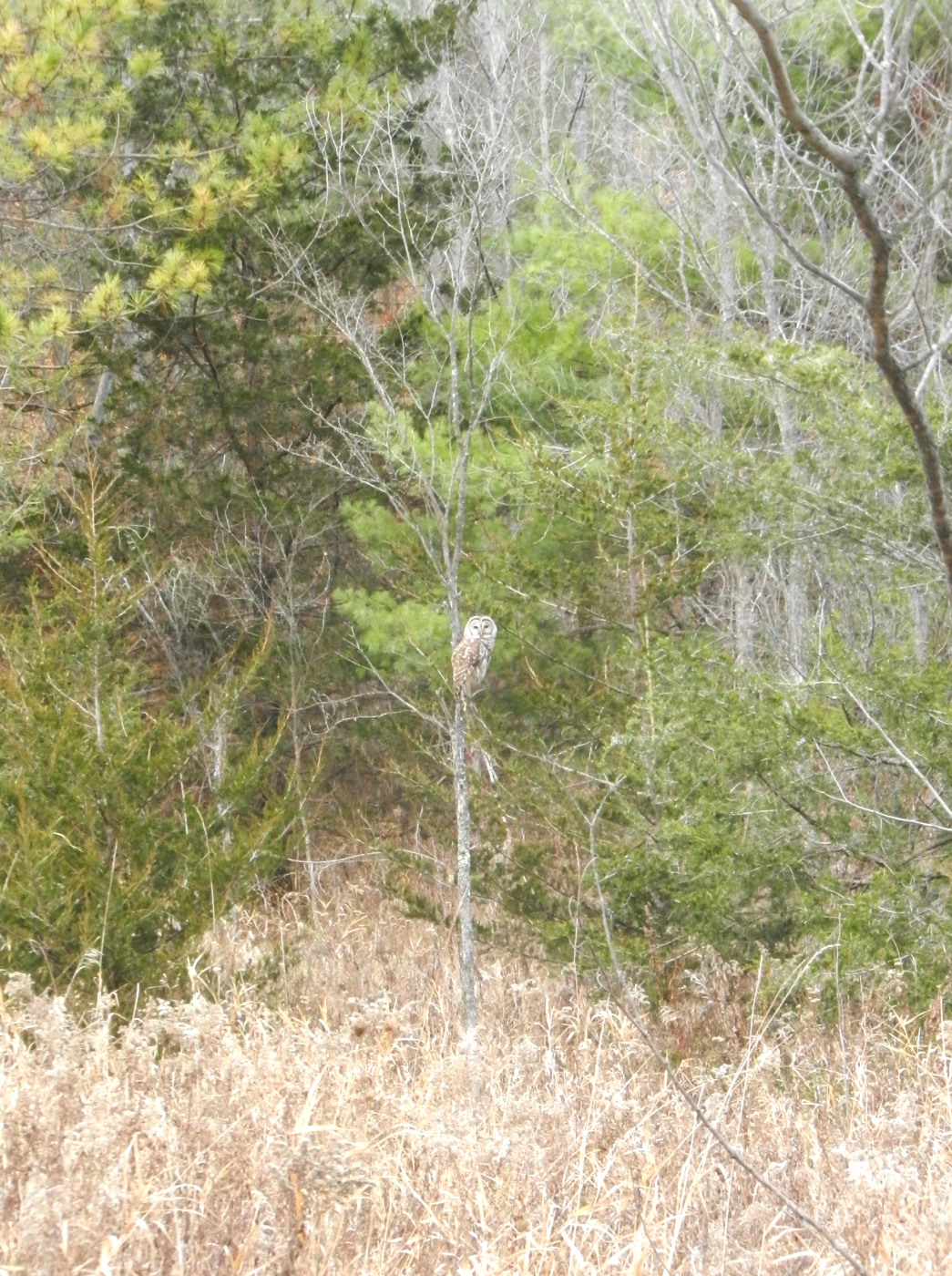 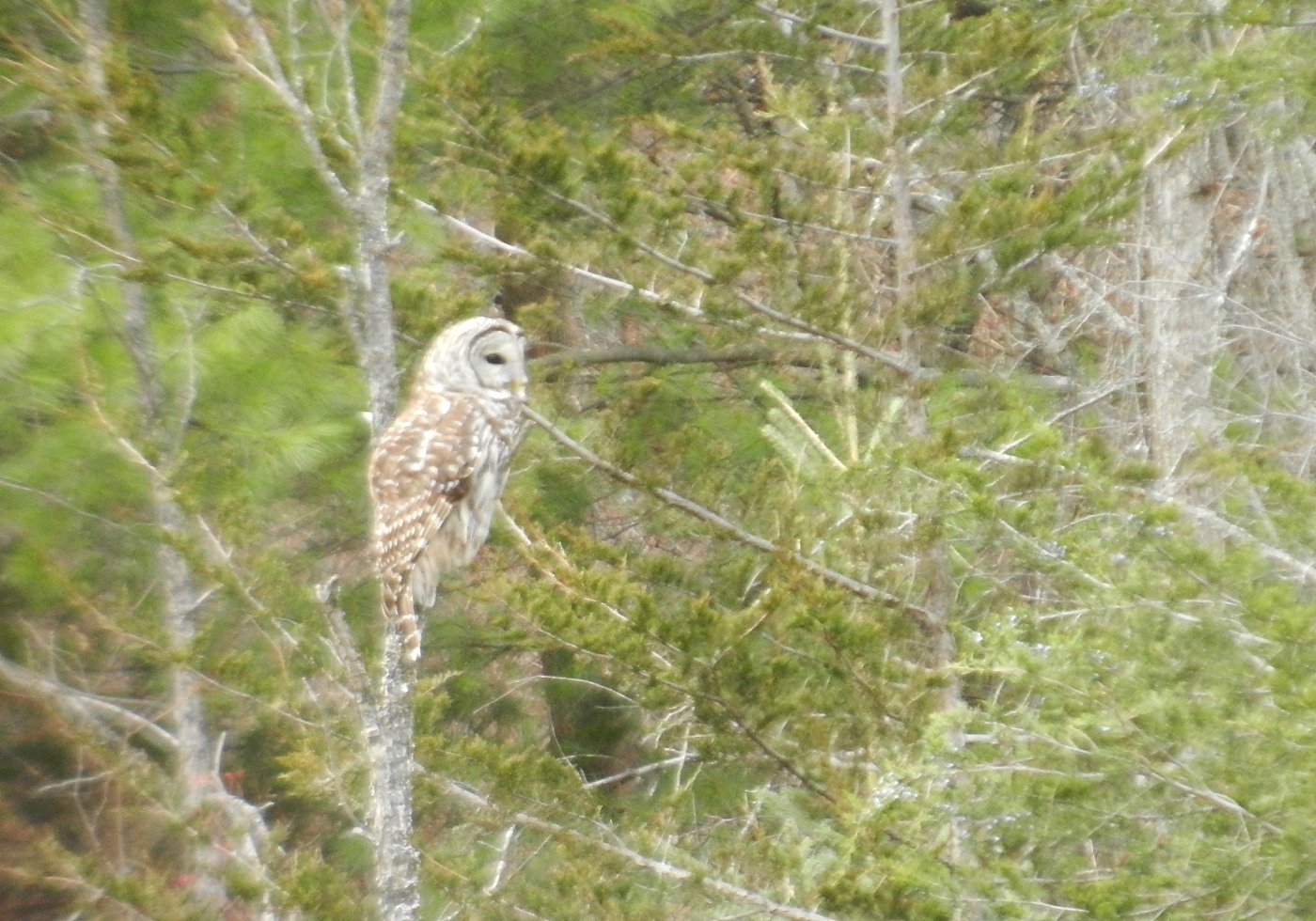 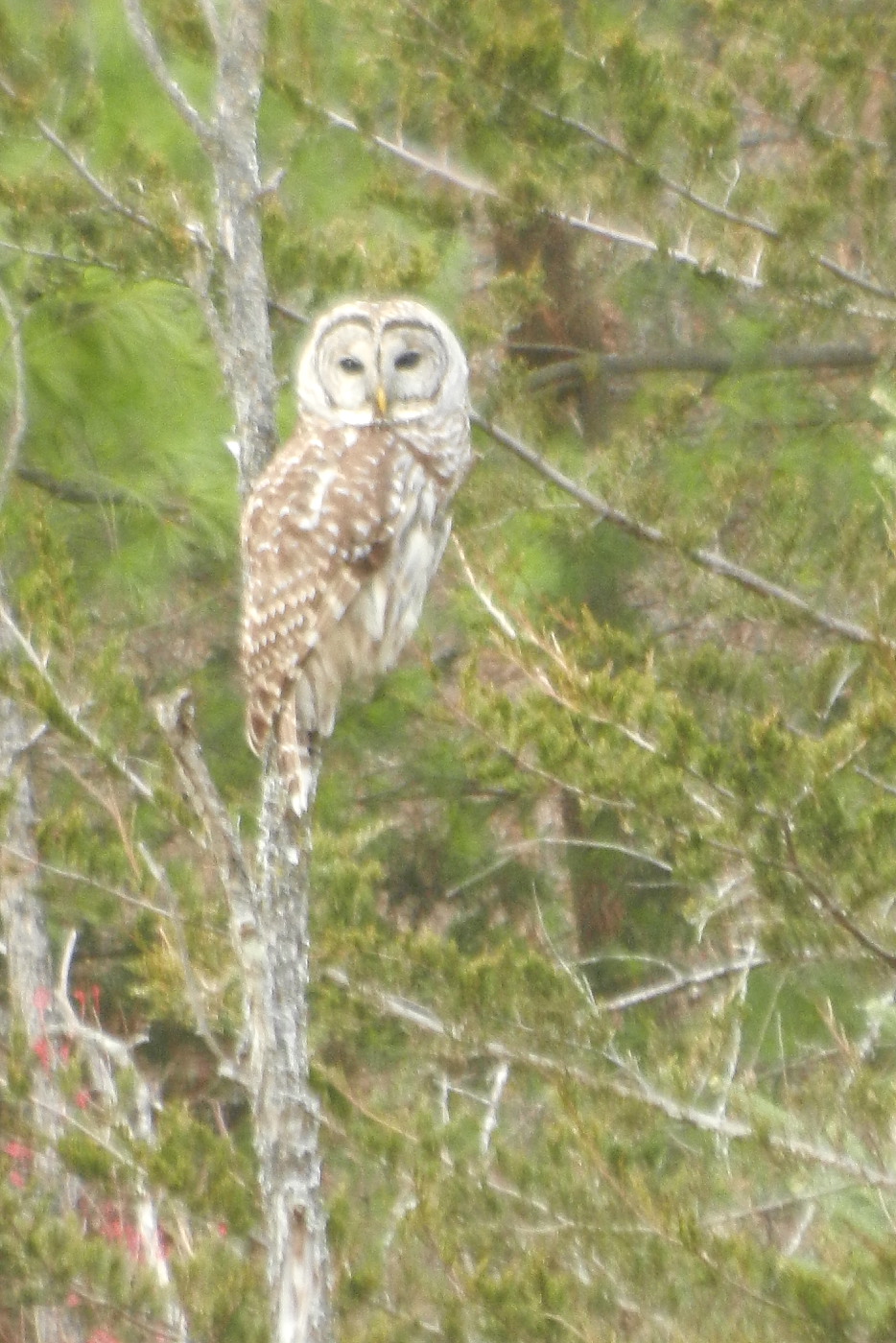 Figures 1-3. A fine view of a barred owl in Ferris Park on 20 November 2021. The bird is in a leafless sapling overlooking the southwest end of a linear swamp, flanking the southeast margin of the drumlins in the northern section of the park. It was about 2-3 metres off the ground, 25 metres northwest of the Ranney Falls access road, 180 metres southwest of the turn to the Park office and yard. Thanks are due to the helpful couple from Kingston who, on their first visit to Ferris, noted the bird as they walked in and again as they made their exit. I was busy with an informal survey of trails and roads, and walked right past it!
View the 22-year (1999-2021) monthly data summary for the great grey owl & other owl species.