--- postcards from the deep Earth

There are ancient rocks in the eastern North China Craton, including sheared gneiss remnants in granites near Anshan, Liaoning province, dated at 3800 Ma (Liu et al., 1992). Eastern and western parts of the craton appear to have fused together along a suture zone near Damaping at about 1900 Ma.

Mantle xenoliths are widespread in Cenozoic alkali-rich lavas of eastern China. from Yunnan, Hainan Island and Zhejiang, north through Shandong and Hebei to Inner Mongolia and "Dongbei", the three "Manchurian", northeasternmost provinces of Liaoning, Jilin and Heilongjiang (Cao and Zhu, 1987). There are also granulites and pyroxenites in the suite, that represent the lower crust (Liu et al., 2001).

Nodule lithologies include essentially anhydrous spinel peridotite (Song and Frey, 1989; Zheng et al., 2001; Rudnick et al., 2004), garnet lherzolite and garnet websterite. The basalts are of late Oligocene to Miocene age, erupted at some time between 24.5 to 10 Ma, together with their entrained xenoliths of lower crust and upper mantle materials. The lavas are intercalated alkalic and tholeiitic basalts, with alkali basalts at the base of most profiles (Princivalle et al., 2014). The xenoliths include abundant spinel lherzolites and harzburgites, with rare spinel-garnet lherzolites plus spinel and garnet-bearing pyroxenites and mafic to felsic granulites. The mantle under the Hannuoba basalt field may have undergone partial melting at about 1900 Ma, during collision of the eastern and western blocks of the North China Craton.

Mindat gives the following note on the site: "Accumulation zone of spinel peridotite mantle nodules enclosed in Cenozoic alkali basalts of the Hannuoba basalt field, which also contain abundant clinopyroxene xenocrysts up to 10 cm in size. The mine also works adjacent placers". Published research on the locality (in English) includes aspects of the petrology (Zheng et al., 2001; Rudnick et al., 2004), mineralogy (Brizi et aL, 2003) and isotope geochemistry of the nodule suite. The latter studies include carbon (Liu et al., 1998), lithium, iron, strontium, neodymium and osmium. Ion microprobe (SIMS) data on lithium contents and Li isotope ratios in coexisting silicate grains are interpreted in terms of reaction of peridotite with melt in the lithospheric mantle beneath the northern North China craton. (Tang et al., 2007). Chalcophile elements in the nodules, such as arsenic, zinc and copper, are typically in sulphide-melt inclusions, usually dominated by pentlandite, with lesser chalcopyrite and pyrrhotite, though sulphide blebs in the pyroxene megacrysts are largely pyrrhotite (Xu and Chu, 1998). 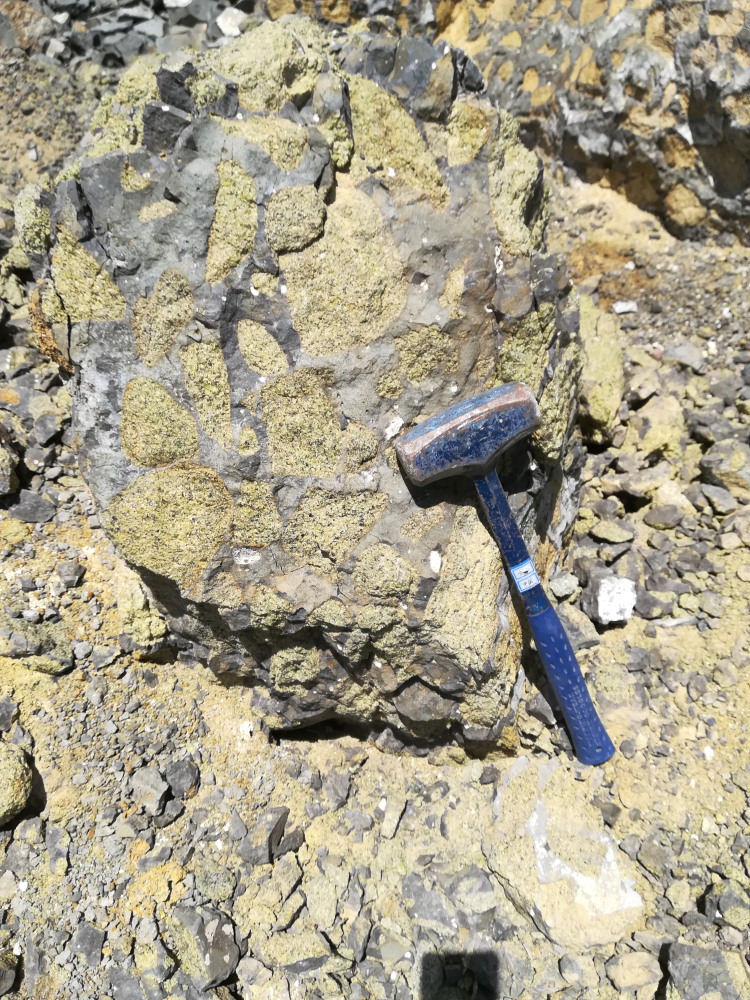 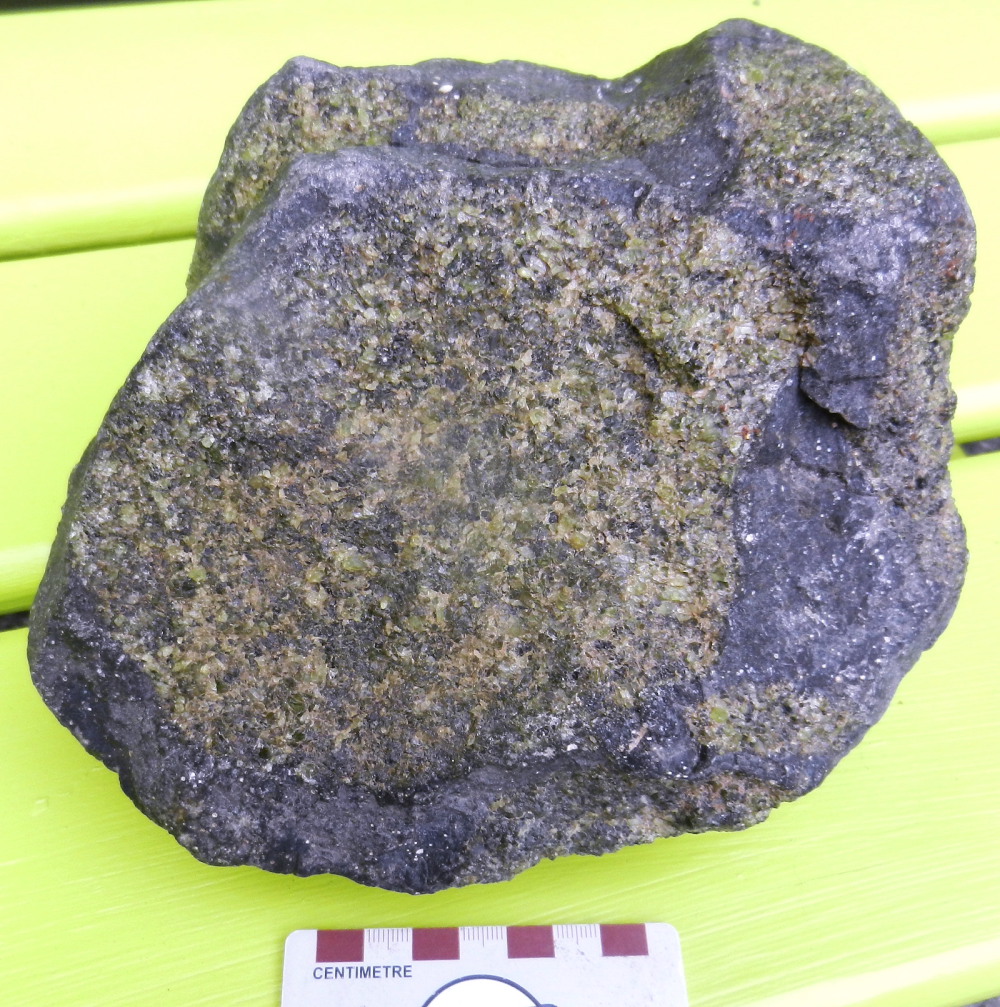 Figures 5-6. The xenolithic basalt in situ, and the original sample, before cutting. Note: individual xenoliths may be rounded, equant, or somewhat flattened in profile. Thus the proportions of xenolith and matrix in a sawn face may well differ from their ratio seen on the outer surface: in some cases, beauty really is skin deep!


Acknowledgements: The sample was kindly donated by Prof. Yang Jingsui on Monday, 23 April 2018. Prof Yang is director of CARMA, the Center for Applied Research on the Mantle, Key Laboratory of Deep-Earth Dynamics, Ministry of Natural Resources, Institute of Geology, Chinese Academy of Geological Sciences, in Beijing. Sawn by Ian Nicklin at the Royal Ontario Museum, where Veronica Di Cecco performed a brief test to identify the megacryst mineral. The smaller end piece is now at a museum in Brazil (the Museu Joias da Natureza in Santos), the slices at the Royal Ontario Museum and the Ontario Geological Survey (Thunder Bay office).