--- from the Tsumeb mine, Namibia, southwest Africa

According to Bernstein (1985), enrichments of germanium occur in iron meteorites and terrestrial nickel-iron, in sulphide ores (particularly sediment-hosted ores), in iron oxide deposits, in oxidized zones of Ge-bearing sulphide deposits, in pegmatites, greisens, skarns, coal and lignitized wood. Thus Ge displays both siderophile and chalcophile behaviour. In the first case, Ge and Ga contents are two of the important parameters for the classification of iron meteorites. Sphalerite is an important host of Ga (second only to bauxite ores). Ga has been reported to reach 3120 ppm in low-Fe sphalerite from Tsumeb. The photomicrographs (Figs. 4-5) help to explain that, with the common exsolution of gallite. Sphalerite and its polymorph wurtzite in zinc ores are easily the most important source of Ge (Cook et al., 2009).

Gallium is recovered largely (90%) from byproducts and in-process components of the separation of aluminium from bauxite ore, specifically the Bayer liquor of bauxite leaching. About 10 percent of world Ga supply is recovered from the hydrometallurgical processing of zinc ores. Other actual or potential sources of Ga are red mud (Al industry waste), coal fly ash, recycled GaAs and LED electronic wastes, and flue dust from furnaces producing elemental phosphorus (Lu et al., 2017).

The estimated average crustal abundance (Clarke) of Ga is 16 ppm (parts per million), and that of Ge just 1.3 ppm. Compare these values with lead and tin (11 ppm, 1.7 ppm, respectively, all values from the compilation of Rudnick and Gao, 2005). Clearly Ga and Ge are far more dispersed than the familiar metals which form concentrated deposits of such common ore minerals as galena (PbS) and cassiterite (SnO2), worked and used for millennia. It is interesting to note that in primitive meteorites the estimated average abundances of Ga and Ge are reversed, at 10 ppm and 32.7 ppm respectively (Anders and Grevesse, 1989). The implication is that Ge, with its siderophile tendency, is relatively concentrated in the Earth's iron core, and so depleted in the crust.

The Tsumeb Mine, Namibia

Tsumeb is a complex polymetallic, pipelike orebody in moderately folded, predominantly dolomitic sediments of upper Proterozoic age (Lombaard et al., 1986). Daltry (1992) lists 139 type minerals and mineral names for Namibia, including 61 valid type minerals, plus 23 unnamed phases. The Tsumeb and Kombat mines are the first and second most prolific sources of type minerals in the country. Namibia is second only to Zaire (Democratic Republic of Congo) as the most prolific African source of type minerals. Tsumeb is the most prolific source in the world of type Ge minerals and arsenates. Gebhard (1999) reported 243 known mineral species from Tsumeb, plus 38 still-undefined species. 52 minerals have Tsumeb as the type locality, and 40 are known from nowhere else on Earth. Tsumeb is noted for the Ge minerals germanite and renierite, amongst other Ge-Ga-rich phases (Sclar and Geier, 1957: Strunz et al., 1958: Springer, 1969). Ga minerals at Tsumeb may be associated with Ge-rich zones (e.g., Schluter et al., 2003).

The mineralogy of the Tsumeb Ge-rich ore has similarities to sediment-hosted Cu deposits such as the Number One orebody of the Ruby Creek deposit in the southwest Brooks Range of Alaska, and the Kipushi deposit in the Democratic Republic of Congo (Bernstein and Cox, 1986; Lhoest, 1995). Renierite also occurs in the Cu-rich basal zone of the polymetallic deposit of Rajpura-Dariba in northwest India (Mozgova et al., 1992). Ge-rich minerals such as germanite and renierite also occur in the Waterloo VMS deposit in Australia (Wagner and Monecke, 2005), and (renierite) in the Bousquet 2 VMS deposit in Quebec (Tourigny et al., 1993). 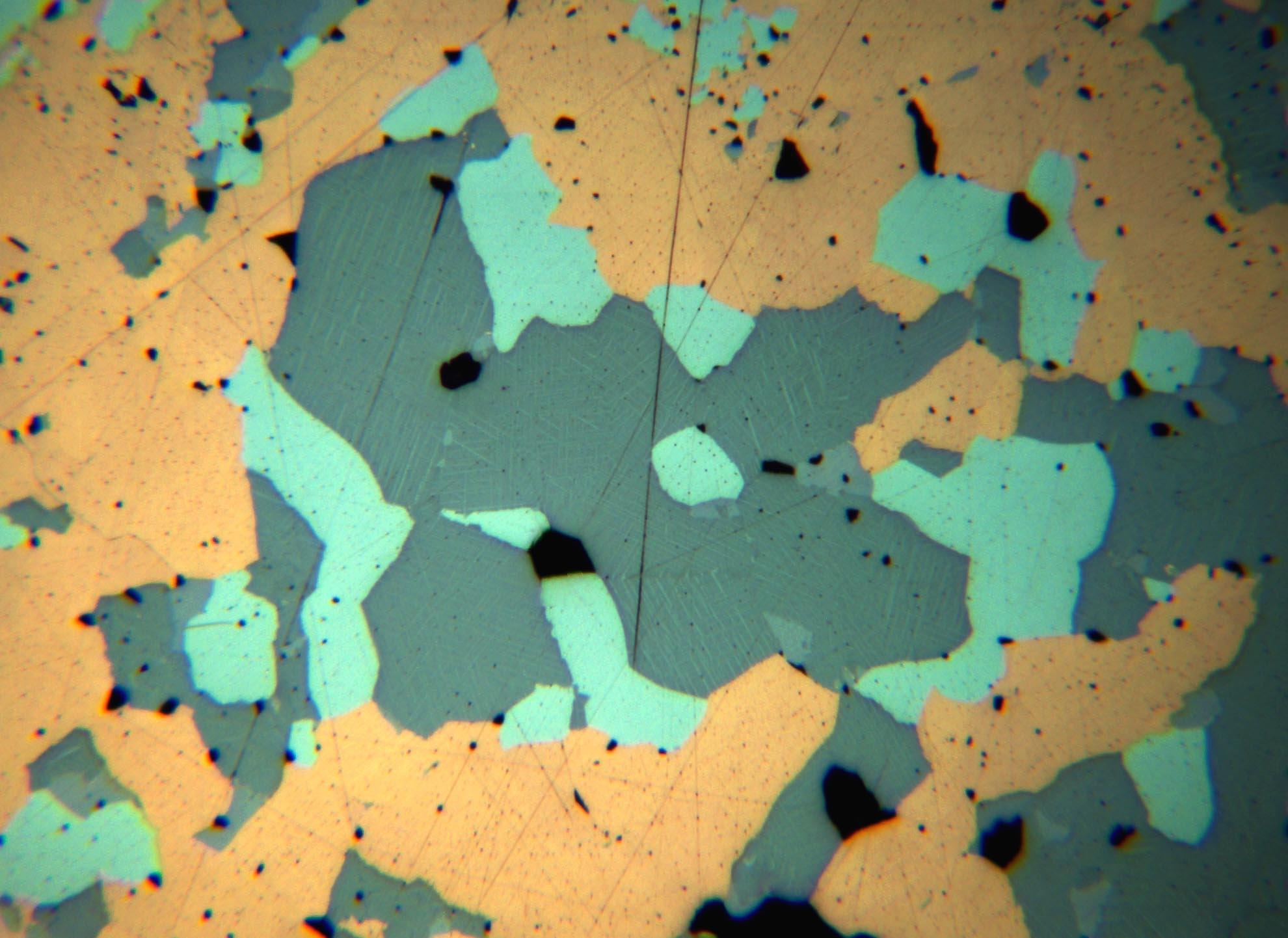 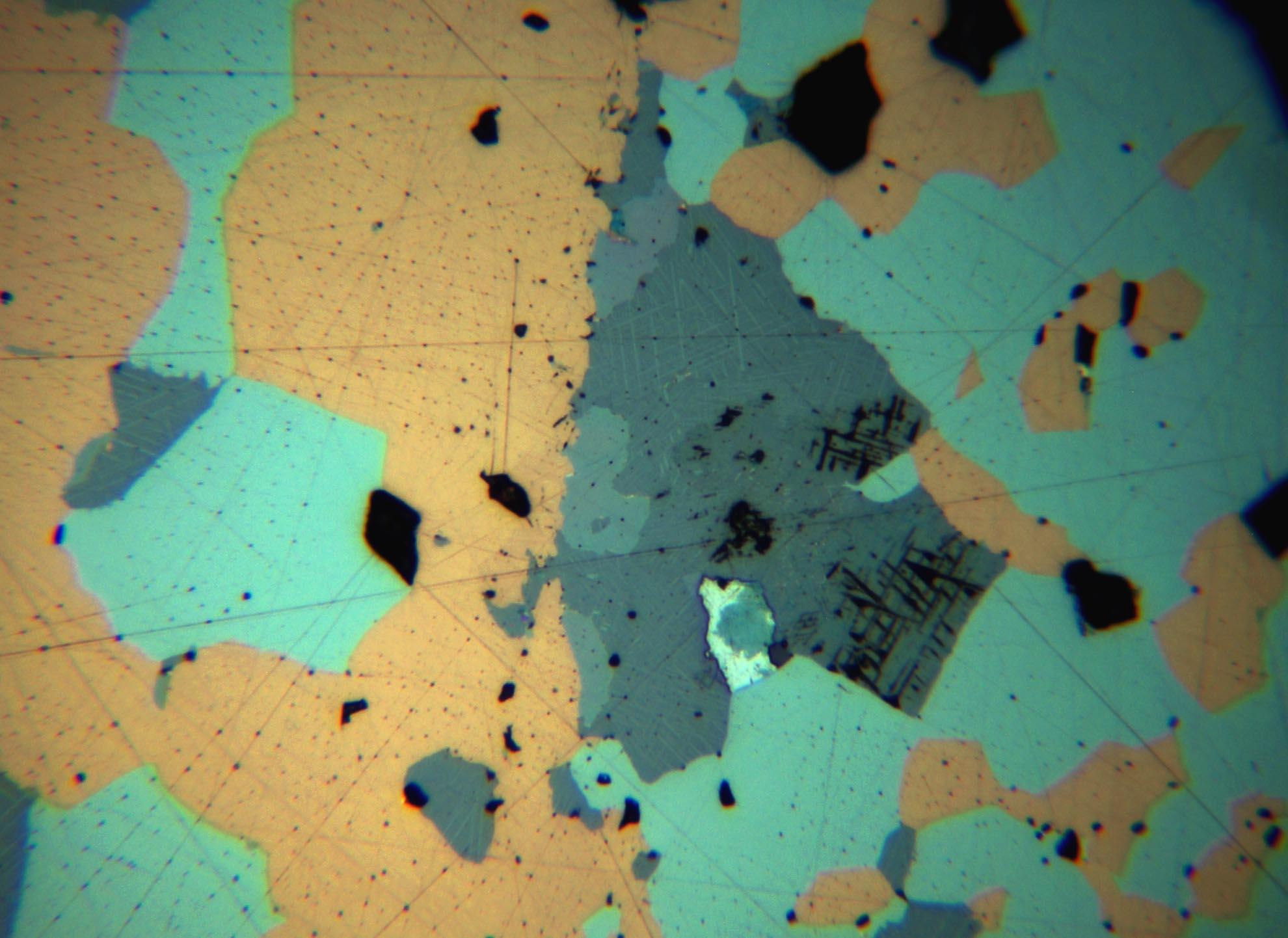 Figures 2-3. Two photomicrographs in plane-polarized reflected light, showing details of the polished mount prepared from a small specimen acquired from David New in 1992, which was labelled "germanite-tennantite". The ore may be porous due to incipient oxidation, since the ore minerals for the most part take a good polish, yet many tiny black pits can be seen in each photo. There was a strong tarnish on the mount, removed by careful buffing. In addition to the minerals shown here, the sample contains traces of chalcopyrite and covellite. The following interpretation is based solely on textural and other visual clues, and is my current "best guess", not gospel truth! When unfamiliar ore minerals such as germanite and gallite appear, details can often be found in such classic works as Ramdohr (1980), Picot and Johan (1977) and Uytenbogaardt and Burke (1971).

2. (left): dark grey sphalerite contains pale grey exsolution lamellae and small angular grains of gallite. The sphalerite is extensively replaced by pale blue-grey tennantite. The well-polished orangey grains are germanite. The optical properties of some of these minerals are quite variable: the tennantite probably contains an appreciable antimony (tetrahedrite) component, while the germanite may carry minor vanadium (?). Nominal magnification 100X, long-axis field of view 0.9 mm.

3. (right): the largest sphalerite grain contains lamellae and, on the left side, grains of gallite, and partly surrounds a bleb of soft, pale grey galena. Orangey germanite and blue-grey tennantite are the most abundant phases. Nominal magnification 200X, long-axis field of view 0.45 mm. 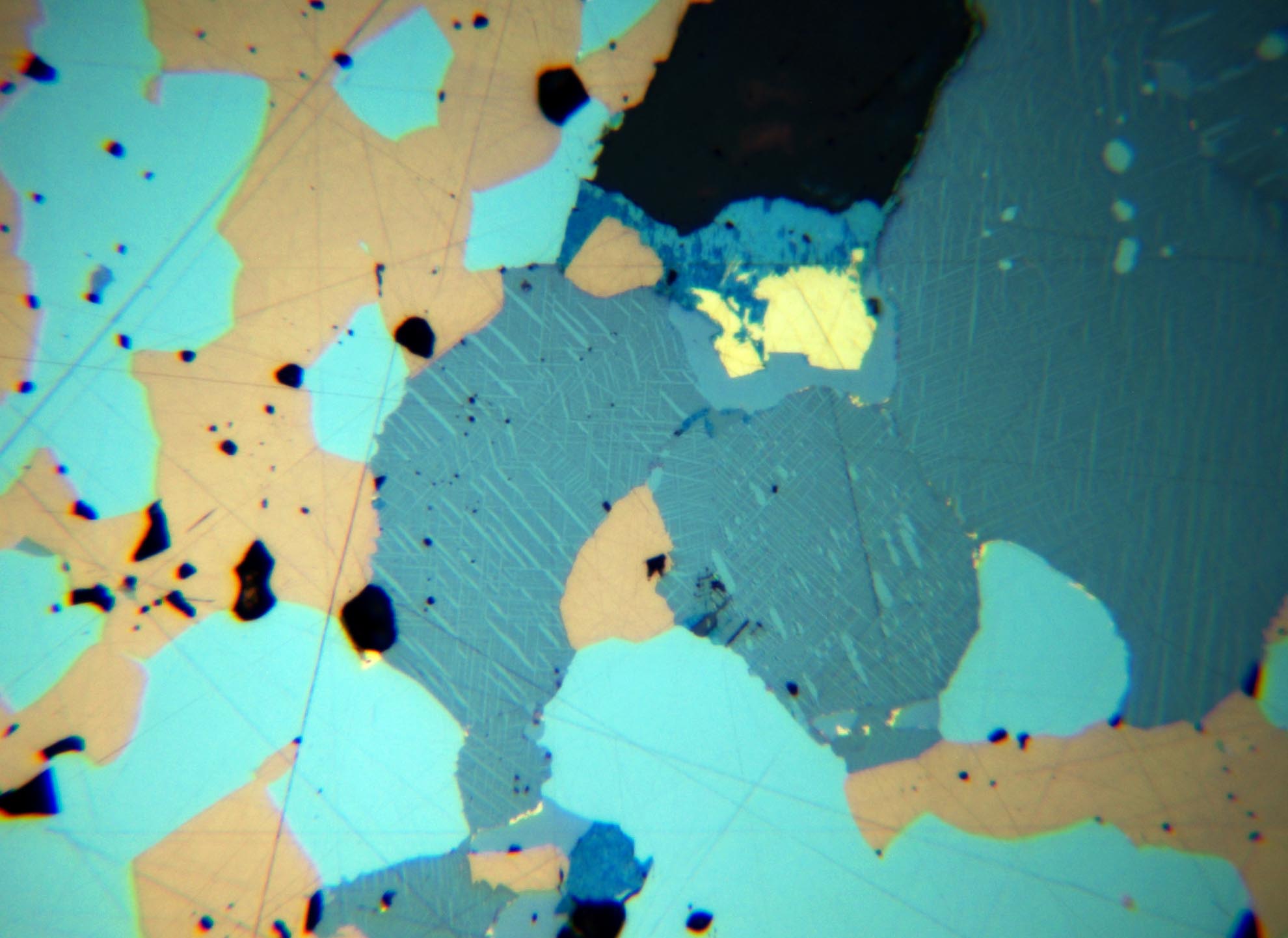 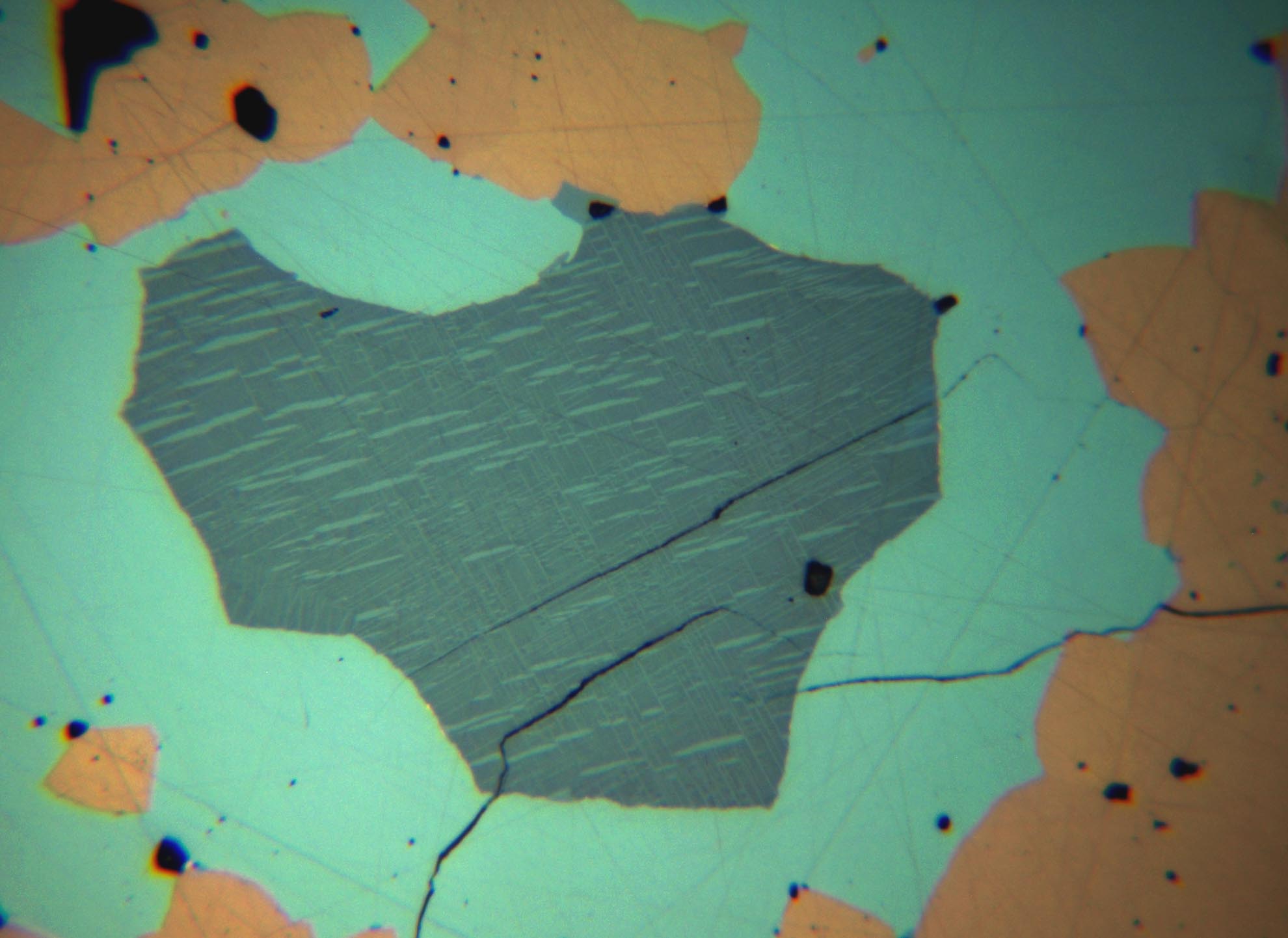 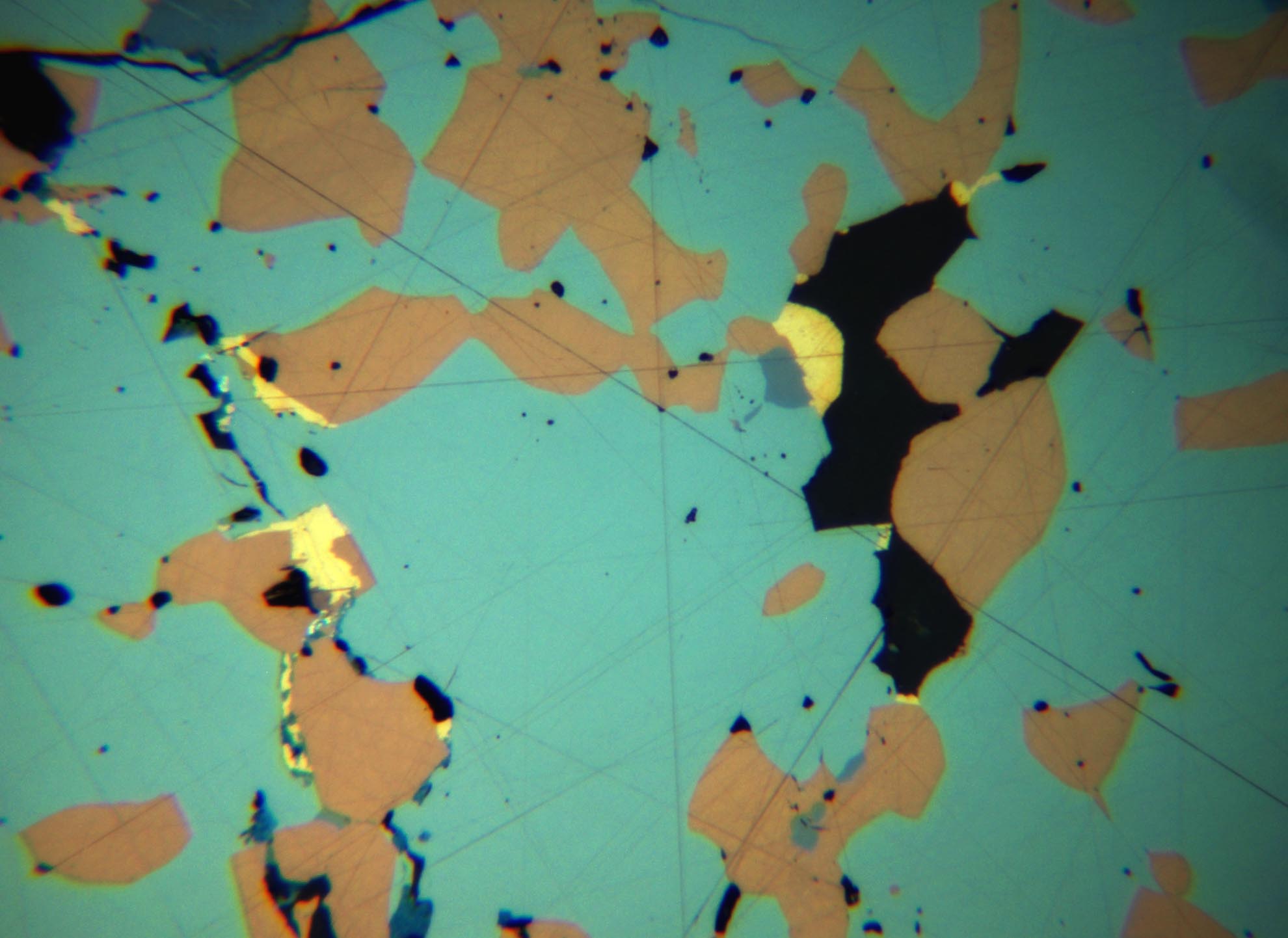 Figure 6. Tennantite and germanite, traces of grey sphalerite, and small grains of chalcopyrite and covellite. The late copper sulphides may line late fractures and voids. Once again, the chalcopyrite appears brighter than usual, in the absence of more reflective minerals such as pyrite. Photomicrograph in plane-polarized reflected light, Nominal magnification 200X, long-axis field of view 0.45 mm.