Based on 598 observations in Seymour township, Northumberland county, southeast Ontario, 1999-2020.

The northern cardinal is most probably a year-round resident, although early observations, 1999-2003, suggested an early summer peak with most sightings between late March and late September. However, despite some absences by the observer, sightings built up ten-fold through 2020, and there seems to be a blunt peak in early spring, a notable number of sightings in winter, and a pronounced scarcity in October and November. So, cardinals may be found in every month of the year. They are often found as pairs, easy to spot in this species due to the contrasting colour schemes of the two sexes. A perennial favourite at feeders, and with the general public, the birds are common through most of New York state, though preferring lower elevations to highland areas such as the Adirondacks (Levine, 1998, p.538). "More than any other species, its increase and spread coincide with the availability of feeding stations". Levine also notes that the species has benefitted from milder winters in the 20th century, and that it "expands its range during the fall after the breeding season".

Across Ontario, the last two provincial censuses of bird breeding (Cadman et al., 1987, 2007) indicate that - as in New York state - the bird's status was less stable and certain in the early period of European settlement, and it was first noted in Ontario at Chatham in 1849. The first reported nesting in Ontario was at Point Pelee in 1901 (Weir, 1989, p.421). Marked expansion occurred in the middle decades of the 20th century. The cardinal is now distributed widely across southern Ontario. It is common on the limestone bedrock of the south, especially along the north shore of Lake Erie and as far northeast as Toronto. More generally, it is common from southern Georgian Bay, south of the outcrop of the southern margin of the Canadian shield, eastwards to Ottawa.

It is a year-round breeding resident at Presqu'ile provincial park, roughly 40 km to the south of Campbellford (LaForest, 1993, p.341). It is apparently a relatively recent inhabitant, having first been noted in Northumberland county in the late 1930s. It is an uncommon year-round resident in southern Peterborough county, to the northwest, and was first reported nesting there in 1951 (Sadler, 1983, p.144). By chance, 22 November 1951 is the earliest known date that a cardinal was reported in the city of Kingston, though a sighting had been made some years earlier (see the superb review of Kingston birds by Weir, 1989, pp.421-422). 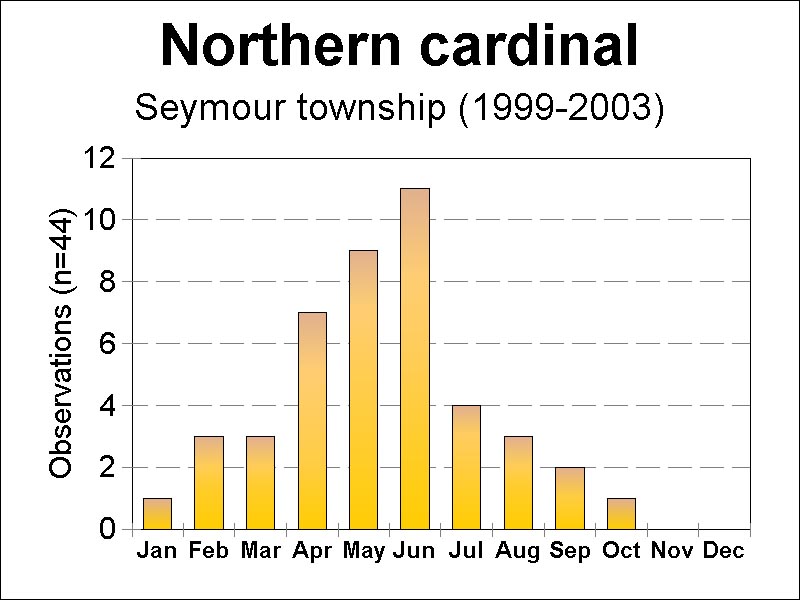