Based on 18 observations in Seymour township, Northumberland county, southeast Ontario, 1999-2003.

The catbird is seen in the area for barely more than three months in the summer, between 12 May and 24 August. It is a common migrant and summer resident at Presqu'ile provincial park, roughly 40 km to the south (LaForest, 1993, pp.286-287). Seen as early as 26 April, it is most commonly seen in mid-May. The birds mostly leave in early October, and have been seen as late as 21 October. LaForest also comments on observations of destruction by catbirds of the eggs of neighbouring birds which `may reduce competition for food resources near the nest'. The bird is also common in Peterborough county, to the northwest, with the usual range listed as 01 May to 02 October, the extremes 28 April to 19 October (Sadler, 1983, p.124).

Interim update: The catbird is a beautiful but unassuming summer visitor, commonly detected by its cat-like call from low thickets. This year (2012) despite a rather mild winter and warm early spring, no catbird has been seen in our neighbourhood as of 08 May, though numerous other migrants and summer residents, such as greater yellowlegs, osprey and turkey vulture, brown thrasher, yellow and yellow-rumped warblers and others have already been sighted.

The catbird has been described in detail by Bent (1948), and there are anecdotes by Lawrence (1974) and behavioural analysis by Stokes (1979). Bent recounts research of bird stomach contents that indicate a diet of some 55% vegetable matter and 45% animal matter. The modest damage to cultivated fruits like grapes and strawberries are more than compensated by its destruction of insect pests, including assorted ants, beetles, caterpillars and grasshoppers. The catbird has been seen to devour large moths, carpenter ants, and assorted weevils and wood borers. 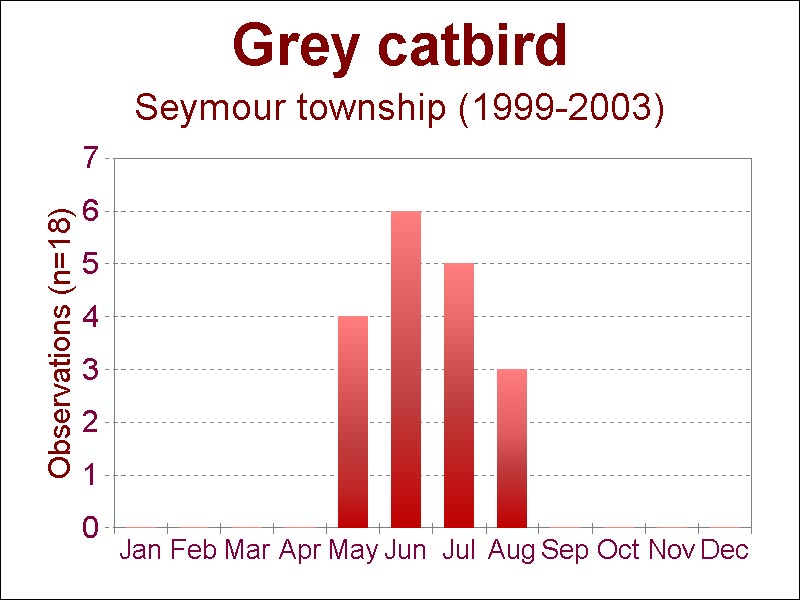