Based on 369 observations in Seymour township, Northumberland county, southeast Ontario, 1998-2020.

The chipping sparrow (175 sighting days) is a familiar bird of the spring and early summer, with its distinctive call, rufous crown and white-topped black eye stripe. The American tree sparrow (194 sighting days) is somewhat larger, a chunky sparrow with a distinct black mark on a pale breast, a brown cap, and brown and grey in place of the black and white facial pattern of the smaller "chippy". The tree sparrow also has two wing bars, and in excellent light the bill is seen to be dark above and yellow below.

The chipping sparrow is quite easy to find in the Campbellford area in May, June and July. The "typical" early and late sightings are circa 18 April and 09 October. However, late 2019 and spring and fall 2020 provided additional sightings. Very early ones have been noted on 02 April 2015 and 18 March 2019. Late chipping sparrows. also overlapping with the date span of tree sparrows, were observed on 20 October and 09, 11, 18 November 2019 and 24 October 2020.

The American tree sparrow is sometimes called the "winter chippy" because of its broadly similar appearance and strong association with winter cold spells in southern Ontario. In the first local sighting recorded here, one bird was seen close-up on Christmas Day, 1998. The tree sparrow has been seen in the area from 13 October to 14 April.

The greatest possibility of confusion ** lies in April and October.

The chipping sparrow is a common migrant and summer resident at Presqu'ile provincial park, roughly 40 km to the south, with an extreme early sighting on 06 April, a late date of 11 November, and one reported winter sighting in early January (LaForest, 1993, pp.346-347). The tree sparrow, in contrast, typically arrives in mid-October and stays until early spring. Peak fall migration occurs in November. Extreme sightings would be 16 September and 20 May.

In Peterborough county, to the northwest, the chipping sparrow is generally found from 02 April to 02 October, with extreme dates of 01 April and 26 October (Sadler, 1983, pp.146-147). One overwintering bird was reported. Sadler notes that the chippy lacks its red cap in winter, and when nesting likes to line its nest with horsehair, whence the old name "hair-bird". The tree sparrow is a winter visitor which varies markedly in abundance from one season to the next. It is largely confined to the interval from 02 October to 01 May.

Below is the first chart compiled for these species, with 66 chipping and 20 tree sparrow observations. You can then view the full dataset, with near-complete 22-year (1998-2020) monthly data summary (765-kb pdf file). 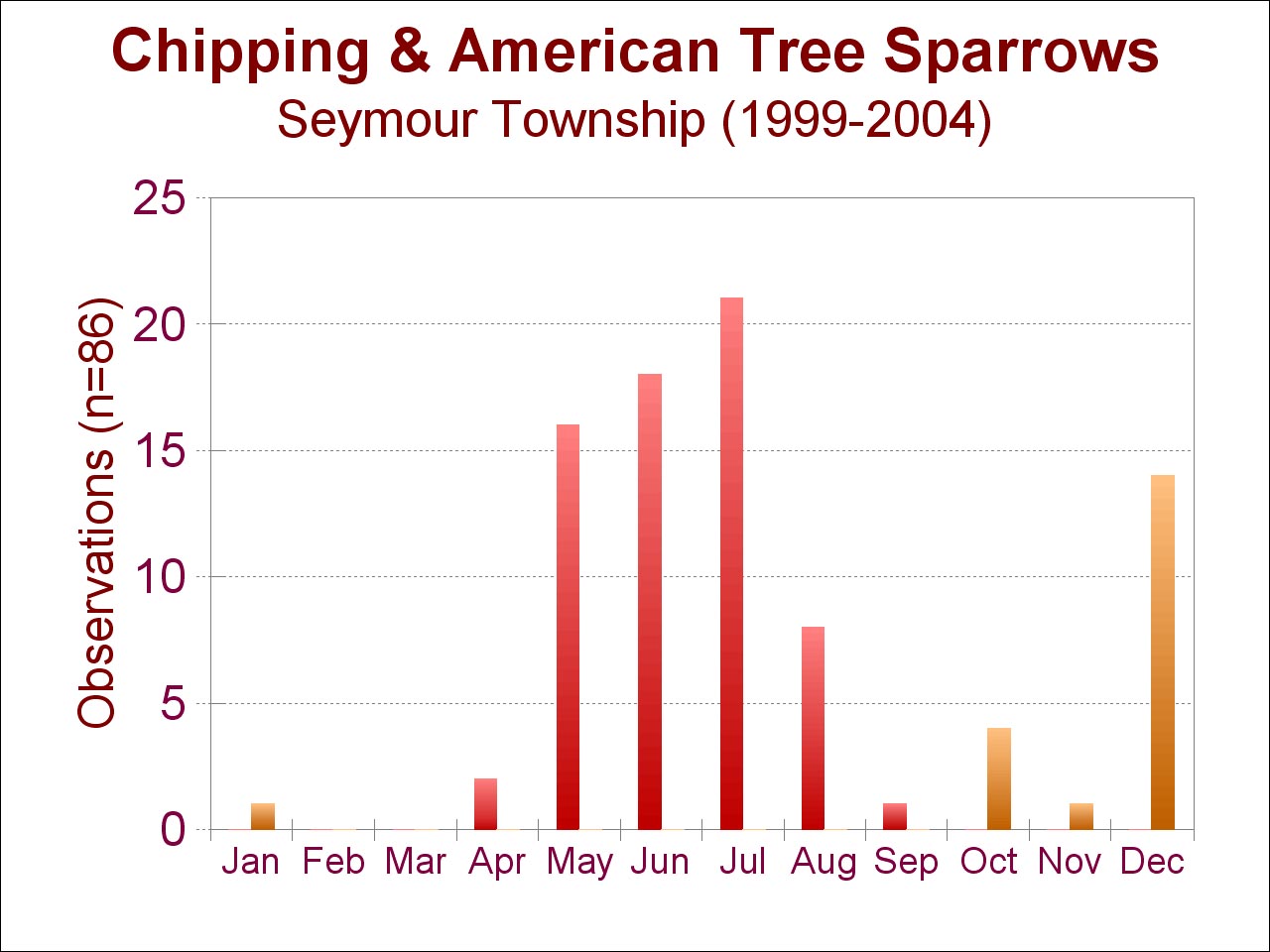 ** Initial confusion. Seven other sightings which had initially been referred to the "chippy" (4 in October, 1 each in November, December and January) were in retrospect probably tree sparrows. The circumstantial evidence for these seven sightings, from the 19th October until 04 January, is quite persuasive. The 15 December 2004 sighting occurred in the afternoon of a day which began at -15°C, in a brief cold snap following a rather mild autumn. That month, one or more birds were noted in each of 13 days from the 15th to the 31st. The alternating days of cold snaps and mild weather in the second half of December 2004 (20 December was the coldest day in the region since 1942) coincided with a protracted visit by tree sparrows in search of food. As of 26 January 2005, the sparrows had been seen on eight days in that month, in a period noted for strong temperature fluctuations, with the latest sighting on 26 January. The seven revised identifications all occurred in cold weather, and generally the sparrows were in company with other winter birds such as juncos, chickadees and waxwings.