The northern flicker (in Ontario, generally the yellow-shafted variant) has been sighted in the township as early as 05 April 2010 and 22 March 2021 (more usually appearing 13-19 April), and as late as 21 October, or at the extreme, 10 November. It is seen most often in late summer and early fall, often glimpsed as it rises swiftly through the woods, displaying a telltale white rump. The birds, unusual for woodpeckers, often feed on the ground, including lawns in urban areas, looking for ants and other staples. One bird or a pair are generally detected. However, in mid- to late summer you may spy a family group, the parents with 2-3 juveniles, feeding or even just "hanging out" in a tree, awaiting the inevitable southward migration.

In New York state the flicker is very widespread. A cavity nester, fond of dead trees, it is most often found in woodlands and woodland edges (Levine, 1998, pp.356-357). The flicker is also widespread in Ontario, breeding across the whole province, and especially in an east-west belt of the boreal forest from the Abitibi belt, across the top of Lake Superior, past Lake Nipigon to the Manitoba border (Cadman et al., 1987, 2007).

At Presqu'ile provincial park, roughly 40 km to the south, the flicker is a common migrant and summer resident. Spring migration typically occurs from late March to mid-May, with fall migration from mid-August to late October. Small numbers of individuals have been found overwintering at the park (LaForest, 1993, pp.230-231). In Peterborough county, to the northwest, the bird is a common summer resident, and a rare winter species, with most arrivals in late March to early April and departure as late as 15 October (Sadler, 1983, pp.104-105). 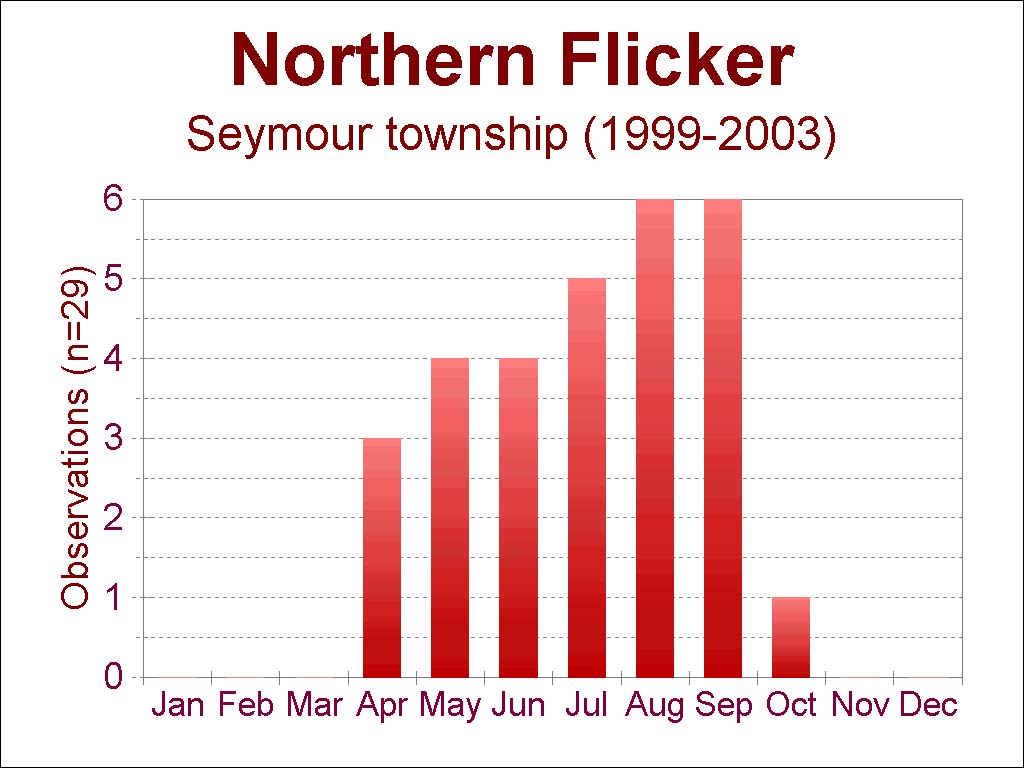 Above is the preliminary annual distribution of sightings, through 2003, while
here is the complete 22-year (1999-2020) monthly data summary for the flicker (235-kb pdf file).