In this area the grackle returns at roughly the same time as the robin and the red-winged blackbird, or soon after, and has been noted between 28 February and 26 November. It is however very uncommon after the third week of August. In fact, some 94% of observations are in the five months March-July, with a tailing off (5%) in August-September. Extremes (February, October, November) scarcely account for 1% of sightings. Typical return dates are between 11 and 26 March, with departures completed, more often than not, before 01 September.

This large and long-tailed blackbird winters south of the Great Lakes, down to the Gulf coast. It actually has at least four Quiscalus cousins, species with similar iridescent black plumage, bright eyes and long tails. The boat-tailed grackle may be found in Florida, and the great-tailed grackle westwards, in Texas, while in the Caribbean there are two more. There is the Carib grackle of the Lesser Antilles and Barbados, and the larger Greater Antillean grackle, found - guess where (!) - in Cuba and Jamaica, Hispaniola and nearby islands.

The grackle is a common spring migrant, summer resident and early fall migrant at Presqu'ile provincial park, roughly 40 km to the south (LaForest, 1993, pp.374-375), as well as an uncommon migrant from early September to early November, and rare to occasional winter resident. Large numbers may be present in late August, prior to the main migration. The bird is also very common in Peterborough county, to the northwest, with the usual range listed as 02 March to 04 November (Sadler, 1983, p.158), although birds may overwinter.

The grackle is a relative of the red-winged blackbird and similar species. It builts nests on horizontal branches 1-9 metres above the ground, often in evergreens. It exhibits interesting communal behaviors, though mated pairs defend their nest space from their fellows (Stokes, 1979, pp.288-299). In the wider Kingston region, southeast from us, grackles typically return around 15 March, with the largest numbers passing through in the first half of April, while southbound returns peak in October (Weir, 1989, pp.461-462). Down in New York state (Levine, 1998, pp.551-553) the common grackle is common to very common as both breeding species and migrant, absent only from the higher peaks of the Adirondacks and Catskills, and heavily forested areas.

The grackle is very common and widespread in most parts of Ontario, with the exception of the northern Hudson Bay Lowlands. Cadman et al. (1987, pp.480-481) affirm that the grackle has been widespread for a long time, though the availability of waste grain may have helped boost numbers in agricultural areas. Nest building may start in late March or early April. The breeding season extends from late April through mid-July. The overall abundance of the grackle is highest south of the Canadian shield, from Lake St. Clair east to the St. Lawrence Lowlands of southeast Ontario (Cadman et al., 2007, pp.600-601). 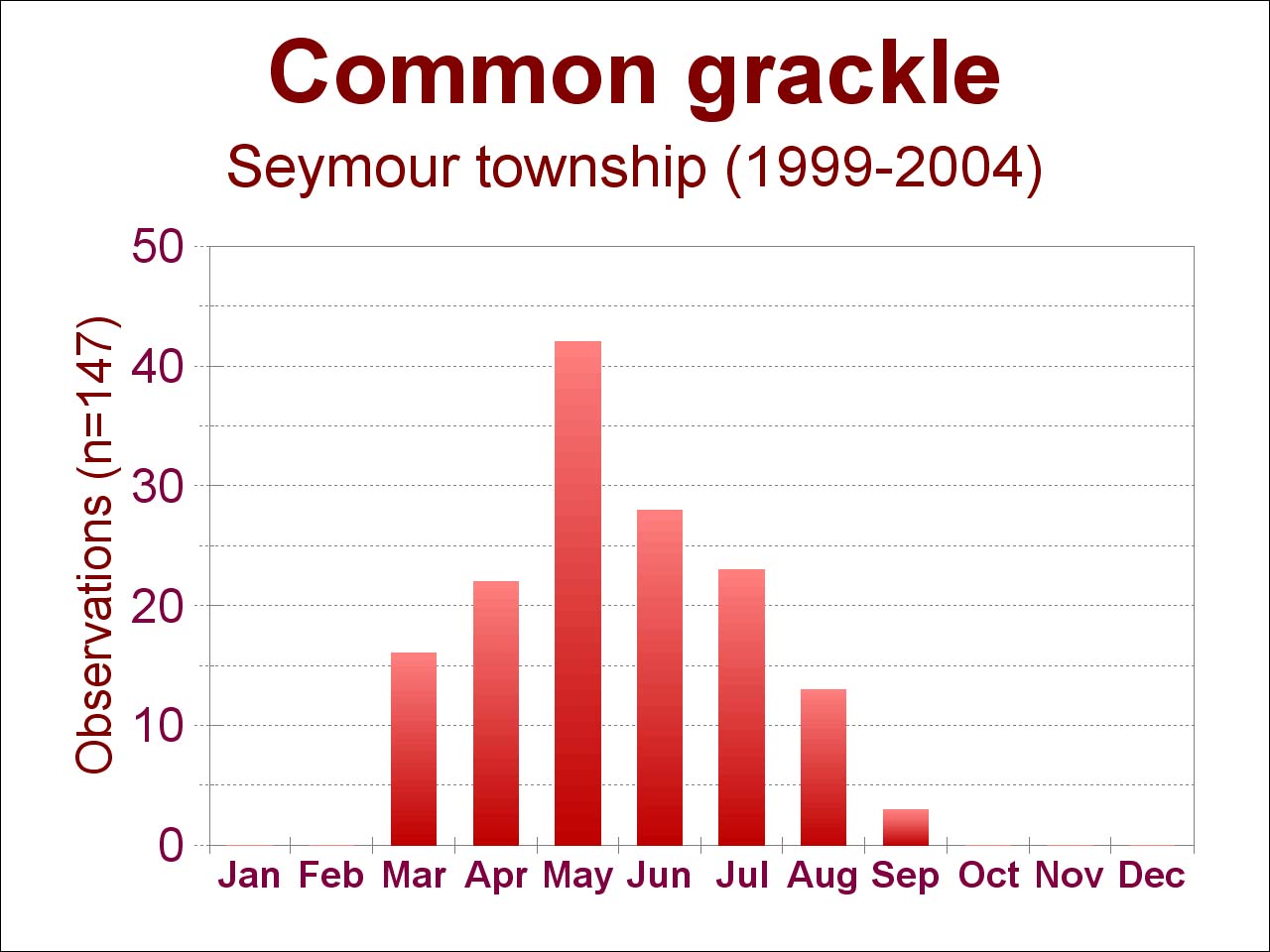