--- another non-sulphide ore mineral of zinc

The Franklin and Sterling Hill mine workings are now inaccessible, being flooded and/or backfilled with tailings. More than 800 publications have appeared since the first paper, an 1810 description of a new mineral species, zincite (Frondel, 1990). In this "rock of the month", even though it is a relatively detailed presentation, we are still just skimming the surface, without - I hope - too many sins of (c)omission!

The New Jersey deposits occur in an area of sillimanite- grade regional metamorphism. Most of the many mineral species occur in small to minute amounts, and are unrelated to the primary mineralization. The coarse granular ores, such as our primary sample for this month, are composed largely of Mn-bearing spinel (the magnetite- franklinite series), plus willemite, zincite and tephroite in a gangue of manganoan calcite. Associated calc-silicate bodies are mostly manganoan andradite garnet, K-feldspars and other minerals such as manganoan calcite, rhodonite, diopsidic pyroxenes and amphiboles (Pinger, 1950; Frondel, 1990).

The deposit has a complex history, including perhaps a stratiform sedex deposit (Sclar, 1990), a "protore" later metamorphosed and deformed (folding at elevated temperature and pressure allowed the dense orebody to sink as an inverted diapir through the marble host rocks) with later formation of a rubble breccia body, evidence of likely Cambrian-Ordovician karstification (Metsger, 2001). The ore textures can be interpreted such that the franklinite, willemite and zincite may represent precursor sedimentary mineralogy, with exsolution textures indicative of a long period of slow cooling following the peak of regional metamorphism (Sclar, 1990).

Other Occurrences and Deposits of Willemite

Willemite can form in hydrothermal settings too, as at the Beltana deposit in South Australia (Elliott, 1991; Groves et al., 2003; Brugger et al., 2003). In practice, large deposits develop, more often than not, over a long span of time and a range of geological regimes, from high temperatures to ambient (surface) conditions, interacting with a variety of fluids. This goes a long way to explaining the long lists of minerals identified at Sterling Hill, Tsumeb, Broken Hill (New South Wales, Australia) and other major deposits.

The Otavi Mountain Land of northeast Namibia contains, besides the Tsumeb and Kombat mines, the Berg Aukas (Grootfontein) mine, noted for kinerals such as descloizite, willemite, dioptase and vanadinite. Berg Aukas ceased operation in 1978, and was hosted in dolomite. The Central orebody was a brecciated pipelike body, oxidized, with cavities lined by massive willemite and/or descloizite (a vanadate of Pb: Cairncross, 1997; see also Verbeek and Bostwick, 1997).

In addition to zinc deposits subjected to regional metamorphism in the upper amphibolite to granulite facies, willemite is reported as a minor mineral in various alkaline intrusive complexes. Examples are Mont St-Hilaire in Quebec (Fisher and Glenn, 1989). Strange Lake in Labrador (Mariano and Birkett, 1988) and albitite of the Ilimaussaq complex in the Gardar province of southwest Greenland (Metcalf-Johansen, 1977).

Willemite also occurs in certain zinc-bearing metallurgical slags (e.g., Bachmann, 1982, and, in the case of the Harz in Germany, Chaudhuri and Newesely, 1993). 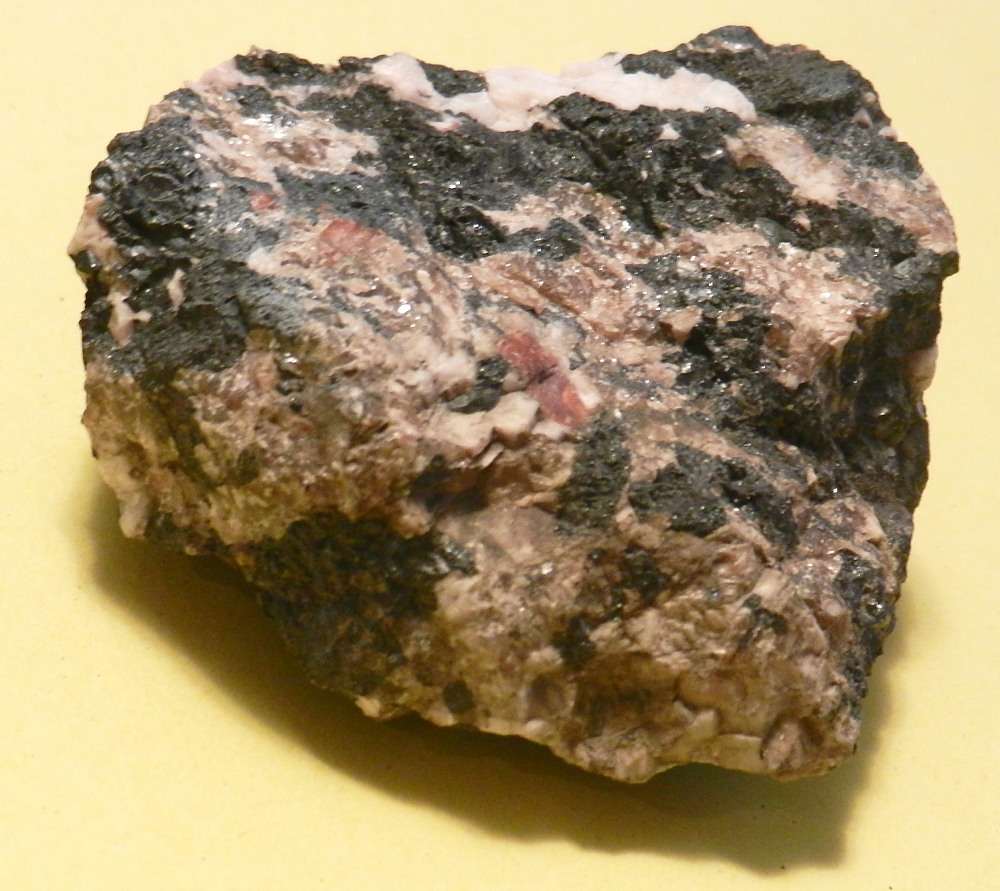 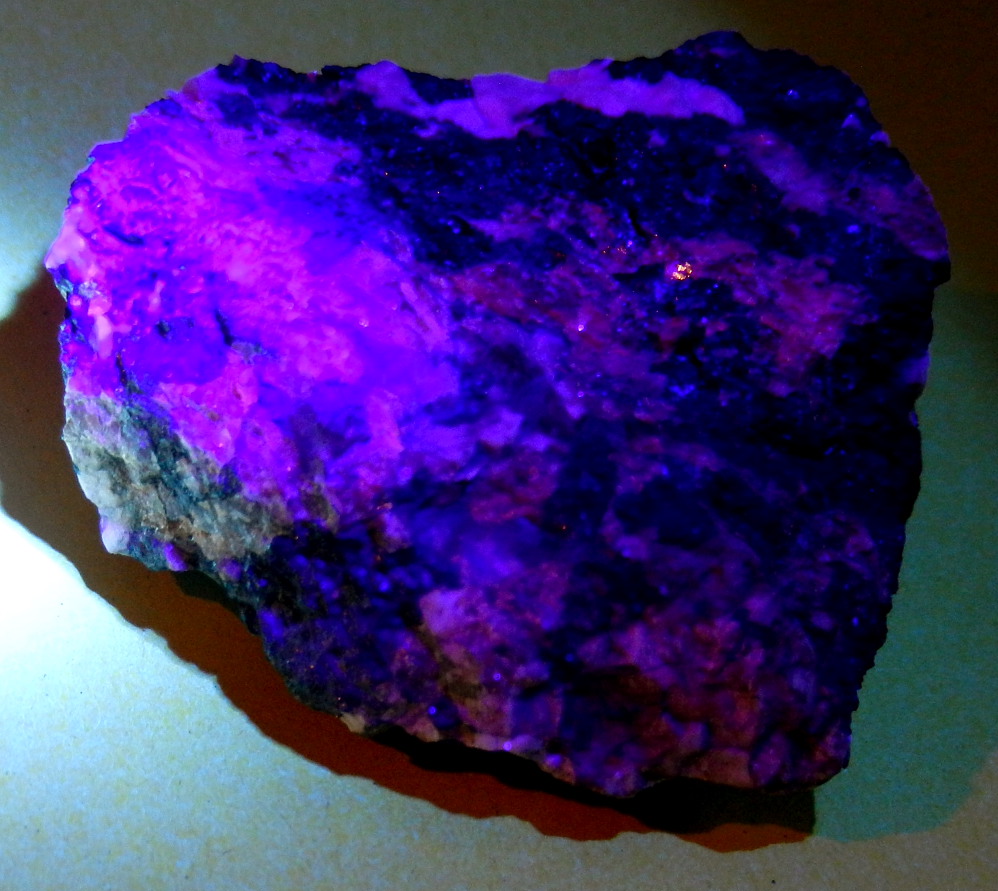 Figures 3-4. Left: Sample in daylight, from the Sterling Hill mine. Orangey sphalerite occurs with willemite (a slightly darker- orangey, tabular crystal can be seen at the centre of this view, long axis trending from upper left to lower right: not fluorescent in LW UV), white calcite and black franklinite. Specimen, circa5 x 5 x 2 cm, from Charles Gould. Right: in LW UV light (sphalerite shows no response in SW UV). Photos provisional. Sphalerite is quite rare in association with ores at Sterling Hill, but does form a component of the matrix of rubble breccias, especially at greater depths (Metsger, 1990). It does occur in much larger amounts at some other Grenville localities, such as the Long Lake mine in southeast Ontario.

Bachmann,HG (1982) The Identification of Slags from Archaeological Sites. Inst. of Arch. Occasional Paper 6.

Visit the Turnstone "Rock of the Month" Archives,

see examples on other non-sulphide zinc minerals such as smithsonite,

or explore the "Rock of the Month Index".