The evidence favours the Stewart Lithia mine, even though other pegmatites around the world contain both rubellite and lepidolite, e.g., Varutrask in Sweden (Quensel and Gabrielson, 1939) and Urubu in northern Minas Gerais, Brazil (Cassedanne and Cassedanne, 1981). With all due thanks to colleagues I have consulted, their experience is conclusive: the Stewart mine in the Pala district, San Diego county, California, is the source of this sample. Such material is widespread in collections: I noted a similar piece (sample 4814) at the Yifu Museum, China University of Geoscience-Beijing, in 2016. According to pegmatite expert Mark I. Jacobson, such specimens were extracted from outcrop at the mine in 1892, and sold into collections around the world. The specimens were an immediate commercial success (Fig. 3) and multiple adverts appeared to sell the goods. Tonnes of specimens were shipped out, hence their wide distribution to this day (Figs. 4-5). The interesting early days of the gemstone mining in southern California are recounted in some detail by Jacobson (2017). 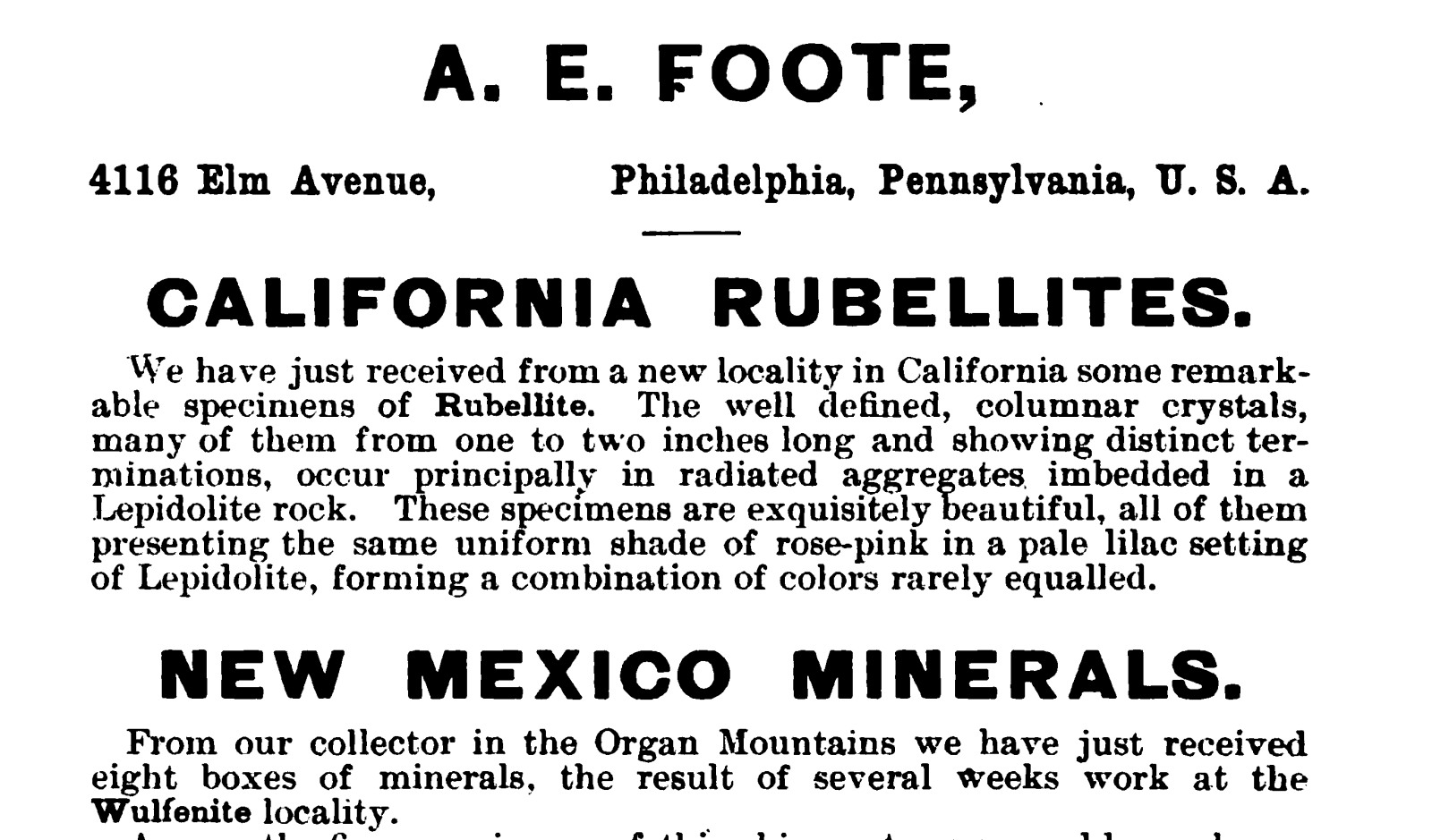 Figure 3.
Advertisement for the hot new thing, the remarkably pretty elbaite on lepidolite from the Stewart Lithia mine, published by the well-respected dealership of A.E. Foote in the American Journal of Science, series 3, volume 43, inside front page, in April 1892, as the production of the gemmy stones was rapidly ramped up. Advert republished in Jacobson (2017). 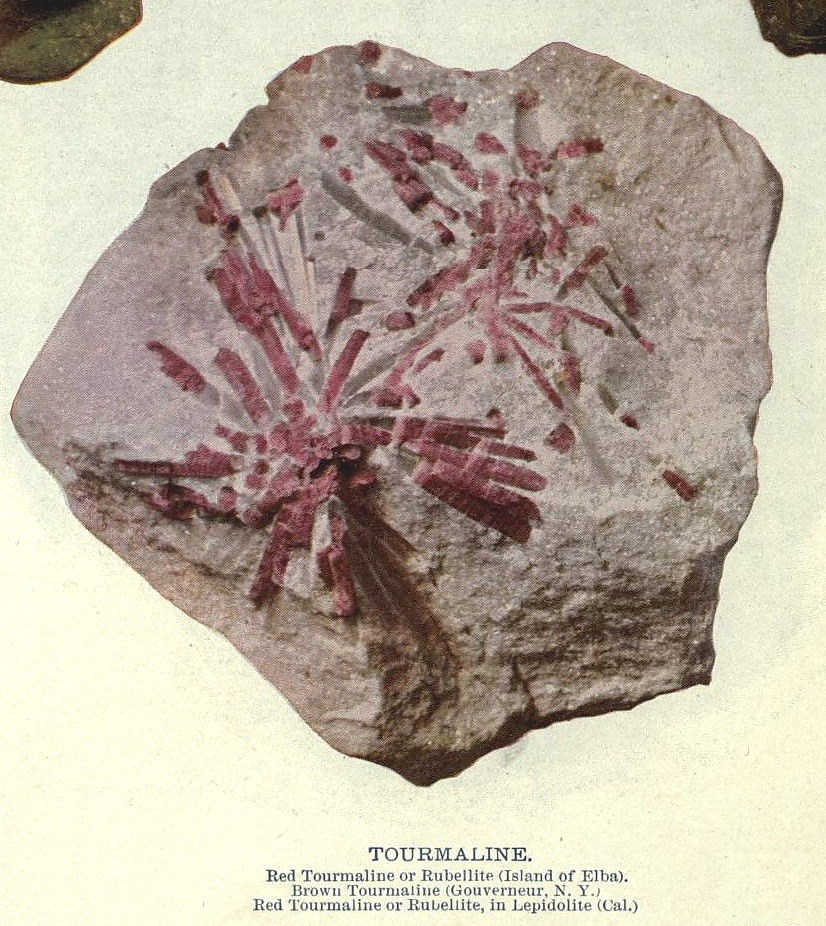 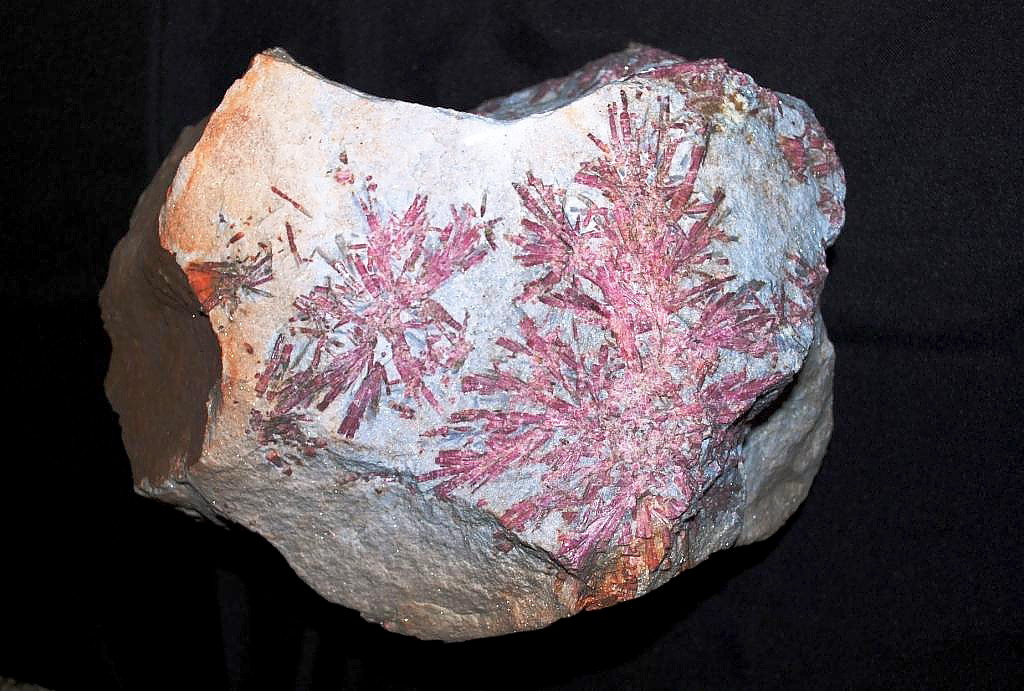 Figures 4-5. Left: an historical specimen, displayed and illustrated in 1903. Figure supplied by Mark Jacobson.
Right: Another piece that has the aspect of the earliest (1880s) finds. Quite a large example, some 13x8inches (33x20 cm) in size, this was recovered by Mark Jacobson in 1986 from loose boulders (the early material was in outcrop, unlike more recent mined specimens, hence this boulder find has the look of the classic specimens). Published in Jacobson (2017).

The association of Aplite and Pegmatite

The specimen, with its combination of coarse and fine-grained crystals, is a modest example of the common coexistence or mingling of both very fine-grained and very coarse granitic lithologies. Such rocks typically form late in the evolution of a cooling mass of granitic magma, and the melt from which they crystallize is enriched in volatiles, such as H2O, CO2, F, Cl, and light elements such Li and B. All these components are significant in that they tend to lower the solidus of the melt, enabling magmatic-hydrothermal activity to continue to unusually low temperatures. F and B both cause great reductions in the granite solidus (Manning and Pichavant, 1983, 1988). Subsolvus granites may form late, with two feldspars, indicate of higher pH2O. A late water influx may induce fusion and remobilisation in a cooling hypersolvus granite (at lower temperatures deuteric changes would result: Martin and Bonin, 1976). Time is the key overall factor in crystal growth, combined with continued availability of the "nutrients" (such as boron for tourmaline) required for the mineral in question. For reviews of zoned pegmatites, including those in southern California, see Jahns (1982) and especially London (2008).

Manning,DAC and Pichavant,M (1983) The role of fluorine and boron in the generation of granitic melts. In `Migmatites, Melting and Metamorphism' (Atherton,MP and Gribble,CD, editors), Shiva Publishing Ltd, Nantwich, 326pp., 94-109.

Manning,DAC and Pichavant,M (1988) Volatiles and their bearing on the behaviour of metals in granitic systems. In `Recent Advances in the Geology of Granite-Related Mineral Deposits' (Taylor,RP and Strong,DF editors), CIMM Spec.Vol. 39, 445pp., 13-24.

McLintock,WFP (1923) On the occurrence of petalite and pneumatolytic apatite in the Meldon aplite, Okehampton, Devonshire. Mineral.Mag. 20, 140-150.

or the "Rock of the Month Index" (a few relevant examples appear below).

Classification of Sample Descriptions available on this Site