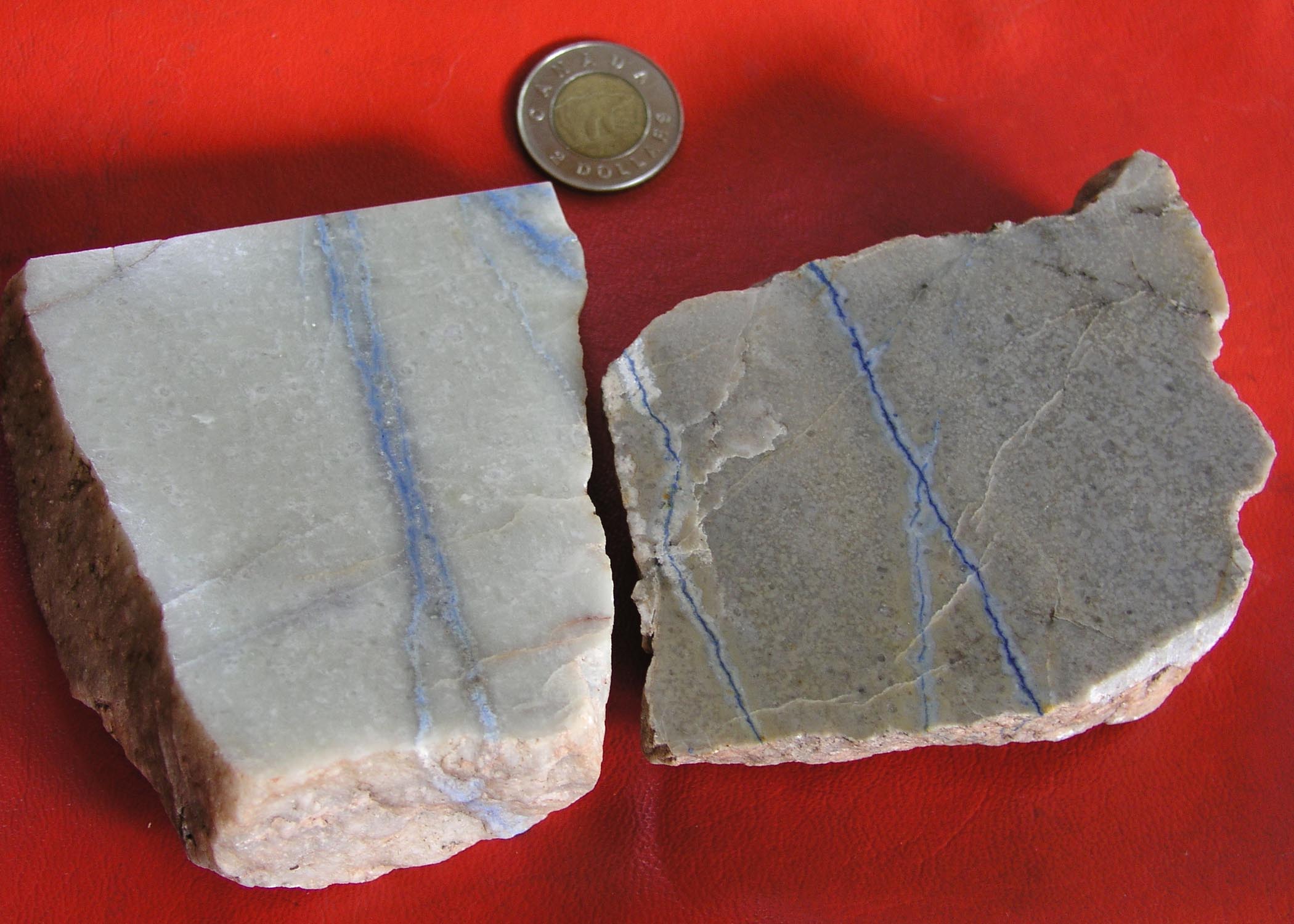 Blue dumortierite veining in a strongly sericitized quartz porphyry. The host rock contains subhedral quartz phenocrysts in a matrix of sericitized feldspar and granular quartz. Minor and accessory phases include (?) barite, pyrite, and leucoxene (an alteration product of Fe-Ti oxides). Sprays of acicular dumortierite, a borosilicate with some chemical and optical similarities to the far more widespread and better-known tourmaline family, line late fractures. The dumortierite prisms are all <0.5 mm in size, but the mineral, forming <1% of each sample, is evidently a strong colouring agent. The $2 coin is 27 mm in diameter.

Weights of pale and darker slices are 418.45 and 412.47 grams. The material is quite lacking in magnetic minerals, with measured magnetic susceptibility of each slice <0.001x10-3 SI units.

Dumortierite may be pink or deep blue in hand specimen (Schaller, 1905; Taner and Martin, 1996). Curiously, this pairing of distinctive colours occurs elsewhere in nature, e.g., in the feldspathoid mineral sodalite, and in the widespread wildflower known as blueweed or common viper's bugloss (Echium vulgare). Nanofibres in rose quartz from pegmatites have recently been shown to be a phase related to dumortierite (Ma et al., 2002).

Advanced argillic alteration systems may develop dumortierite together with other minerals such as andalusite, tourmaline and corundum. The mineral is found in aluminous hydrothermal alteration associated with porphyry and epithermal deposits of Cu and Cu-Ag-Au and in Archean Au deposits (e.g., in British Columbia and Quebec, Canada), and in high-grade metamorphic settings (e.g., in Sri Lanka and Italy), given a sufficient level of boron, a light element that is an essential part of its chemical formula. Dumortierite also occurs in aluminous metamorphic rocks together with other Al-rich phases such as sillimanite, topaz and corundum. Dumortierite is often found in Al- and B-enriched quartzites, as in Bahia state, Brazil (Morteani and Ackermand, 2004), where the original sediments are shown to have accumulated in a sabkha-like sand-flat setting. To cite a few other examples, it occurs in numerous locations in Canada (in Ontario, Newfoundland, etc); the United States (Nevada, New Mexico and Arizona, California, Colorado and New Hampshire); in Bolivia and Chile; in South Africa and Namibia; in central Europe and in Norway, northern India and Afghanistan.