from the Grenville province of southeast Ontario 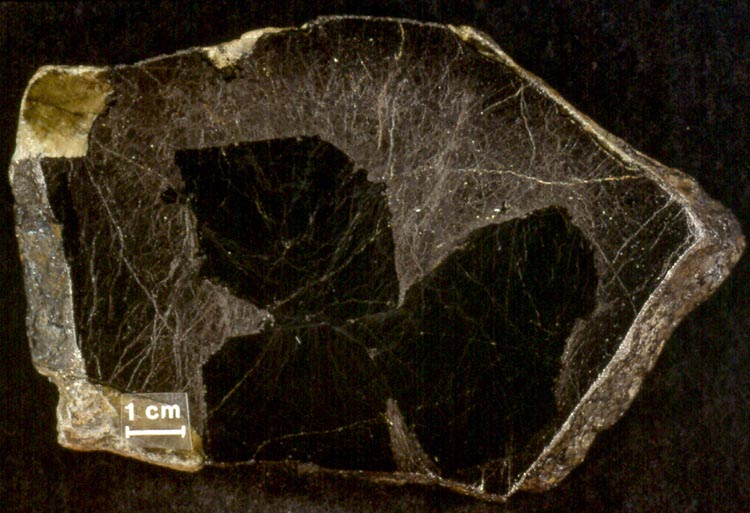 Sample 1055, collected 21 June 1987. A magnetite-rich gabbroic to pyroxenitic pegmatite of Grenville age, a small dyke or irregular mass ("pegmatoid") related to a small mafic intrusion straddling the boundary of Bedford and Hinchinbrooke townships, in southeast Ontario. This body, the Oconto gabbro, contains clots of oxide rimmed by nests of biotite flakes, up to 1 cm in diameter. Minor veinlets are composed of pink carbonate, plus diopside, epidote, garnet and trace chalcopyrite.

This striking pegmatite is composed of pyroxene grains up to 7x4 cm in profile, in a groundmass of coarse granoblastic magnetite. Contiguous areas of the iron oxide may exceed 10 cm in diameter. The magnetite surrounds the coarse dark pyroxene, as in the example of the `trillium'-like group of pyroxene crystals (the 3-lobed trillium is a botanical genus which includes the provincial flower and official symbol of Ontario). Lesser pale plagioclase may be surrounded by magnetite and cut by thin veinlets of the oxide. The 3 dark pyroxene euhedra have 6-8 sides, and are simple-twinned parallel to long axes.

Oconto and nearby small towns and hamlets were stops on the K&P Railway, which extended northwards 180 km from the port city of Kingston, built 1872-1884 (Bennett and McCuaig, 1981; Wilson, 1984). Several small gabbroic bodies occur in this part of Frontenac county, and some have been used for building stone (Harding, 1951). They may vary from diorite to gabbro to gabbroic anorthosite or even anorthosite. The majority of the Grenville "gabbros" in the region are relatively differentiated (often, diorite is a better field term), and they are commonly affected by greenschist to amphibolite facies regional metamorphism (Wilson, 1994). Thus, pyroxenes are often uralitized and feldspar may be altered to scapolite. A survey of the region's mafic-ultramafic rocks revealed very low contents of platinum group elements (PGE: Wilson, 1994; Wilson et al., 1995).

A thin section of the pegmatite dyke contains "an estimated 47% magnetite and 8% ilmenite, plus altered pyroxene and feldspar. Traces of carbonate, prehnite, (?) quartz and pyrite are also present. The oxides may be rimmed by sheet silicates, chlorite and biotite, the latter apparently generated in late deuteric reactions with plagioclase. The feldspar of the host rock contains abundant antiperthite, such that the rock is classified as a monzogabbro. The rock also contains major amounts of clinopyroxene and biotite, and abundant magnetite and apatite. Traces of pyrite and carbonate are present, plus rare chlorite, epidote and pyrrhotite" (Wilson, 1994).

Bennett,C and McCuaig,DW (1981) In Search of the K&P: The Story of the Kingston & Pembroke Railway. Renfrew Advance Limited, Renfrew, ON, 115pp.

Wilson,DM (1984) The Ontario and Quebec Railway: a History of the Development of the Canadian Pacific System in Southern Ontario. Mika Publishing Company, Belleville, Ontario, 262pp.