Native Gold from the Hoyle Pond Mine 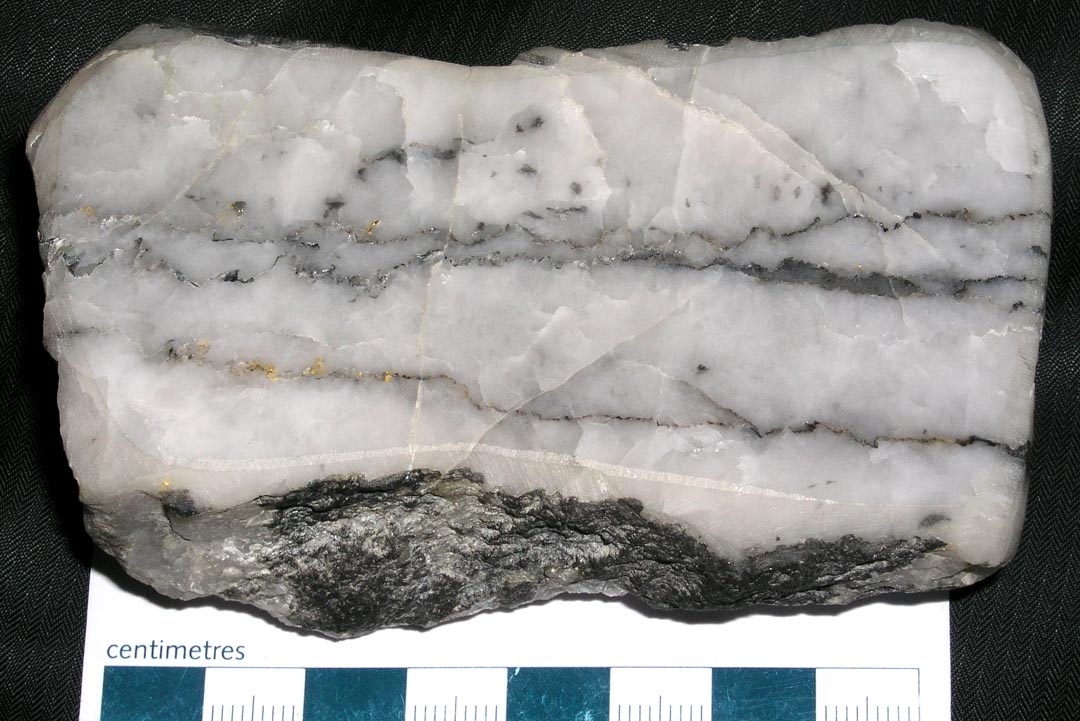 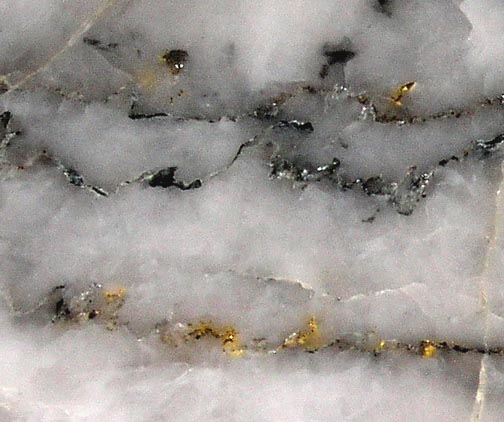 A spectacular example of native gold in a quartz vein from the Hoyle Pond mine. This sample (707A) was collected in September 1985 from the 16 Vein on the 2-1 sublevel. From the viewpoint of the student of structural geology, and of economic geology, the prominent fabric of deformation in the host quartz vein is of great interest. The dark grey wiggly lines that run along the length (long axis) of the white quartz vein are known as stylolites, a feature attributed to the action of pressure solution. In this process, some minerals such as carbonates and silica dissolve preferentially under stress, leaving behind concentrations of insoluble materials, such as clay minerals and the dark phases seen in the Hoyle Pond sample. Sulphides such as pyrite may be deposited along the stylolites later, during or subsequent to any economic mineralization, for as long as they remain channelways permeable to solutions moving through the rock.

Stylolites are described mostly in limestones, and sometimes in related cherts, and in sandstones, but on rare occasions in igneous rocks such as granites and felsic porphyries. They also occur in banded veins, sometimes termed ribbon quartz. In this example, the stylolites are lined with sheet silicates (including iron-rich ripidolite [a chlorite] and paragonite [sodic hydromica]), as well as dravite (magnesian tourmaline) and native gold. There is also a component of dark carbonaceous matter, insufficiently crystalline to merit the name "graphite", which serves as a reductant, helping to precipitate gold from solution (see the enlarged inset photo, above, showing intimate association of gold with the dark assemblage of carbon, tourmaline, chlorite and micas). The quartz itself is white to greyish white with a somewhat waxy lustre, and the stylolitic microstructure, and this appearance is prospective for gold in the area, even if the native metal itself is not visible. In this case, NO gold was visible when the sample was collected for later examination, dimly illuminated, from a puddle in the drift. Similar structures in gold-bearing quartz-vein systems have been reported elsewhere, e.g., in Nova Scotia and British Columbia (Canada), Queensland and Victoria (Australia).

The piece weighs 249.15 grams, and the average bulk magnetic susceptibility is <0.001x10-3 SI units, consistent with overall felsic mineralogy and a lack of surviving magnetite or other strongly-magnetic minerals such as magnetic pyrrhotite.

The Hoyle Pond mine is a relative newcomer in the Timmins gold mining camp, which in its first 90 years produced over 60 million ounces of gold, 1909 to 1999, from more than 60 deposits (Pressacco, 1999). High gold prices today ensure that gold exploration and mining continue in the region. Hoyle Pond, like its neighbours, is an example of a mesothermal lode gold deposit of Archean age, hosted by metavolcanic and metasedimentary host rocks, including carbonaceous argillites. Gold is commonly associated with pyrite. The area is generally flat-lying, with an abundance of cedar and alder swamps, and thus with minimal rock outcrop. With veins displaying consistent grades, typically 13-18 ppm, over mineable widths, Hoyle Pond joins the ranks of other local mines, such as the venerable Dome mine, that has enjoyed a lengthy life, even though the nature of the mineralization has encouraged or necessitated operation with relatively modest defined reserves.

Diehl,SF and Goldhaber,MB (1990) Microstructures in the Cambrian Bonneterre Formation and Lamotte Sandstone of southeast Missouri; sulfide occurrence in stylolites and extensional veinlets. In `Workshop on Application of Structural Geology to Mineral and Energy Resources of the Central Region' (Thorman,CH editor), USGS OFR 90-0508, 17pp., 2-5.

Merino,E (1992) Self-organization in stylolites. American Scientist 80 no.5, 466-473. A less-technical account in a journal noted for its well-illustrated overviews.

Schaubs,PM and Wilson,CJL (2002) The relative roles of folding and faulting in controlling gold mineralization along the Deborah anticline, Bendigo, Victoria, Australia. Econ.Geol. 97, 351-370.