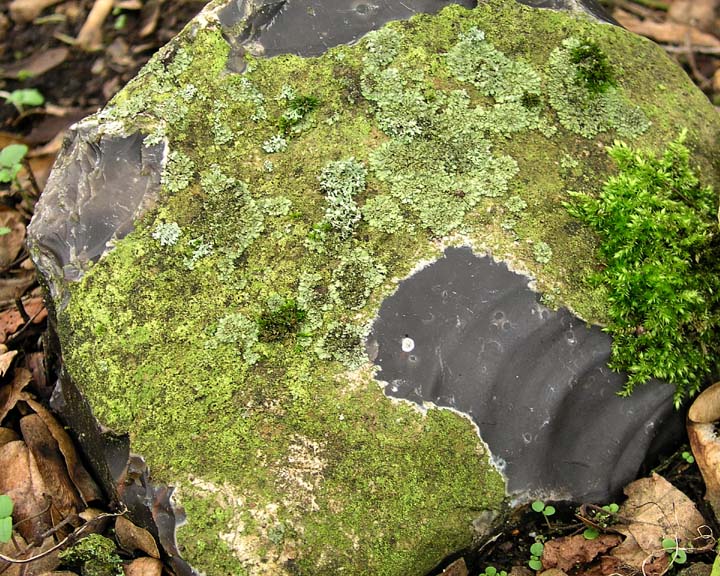 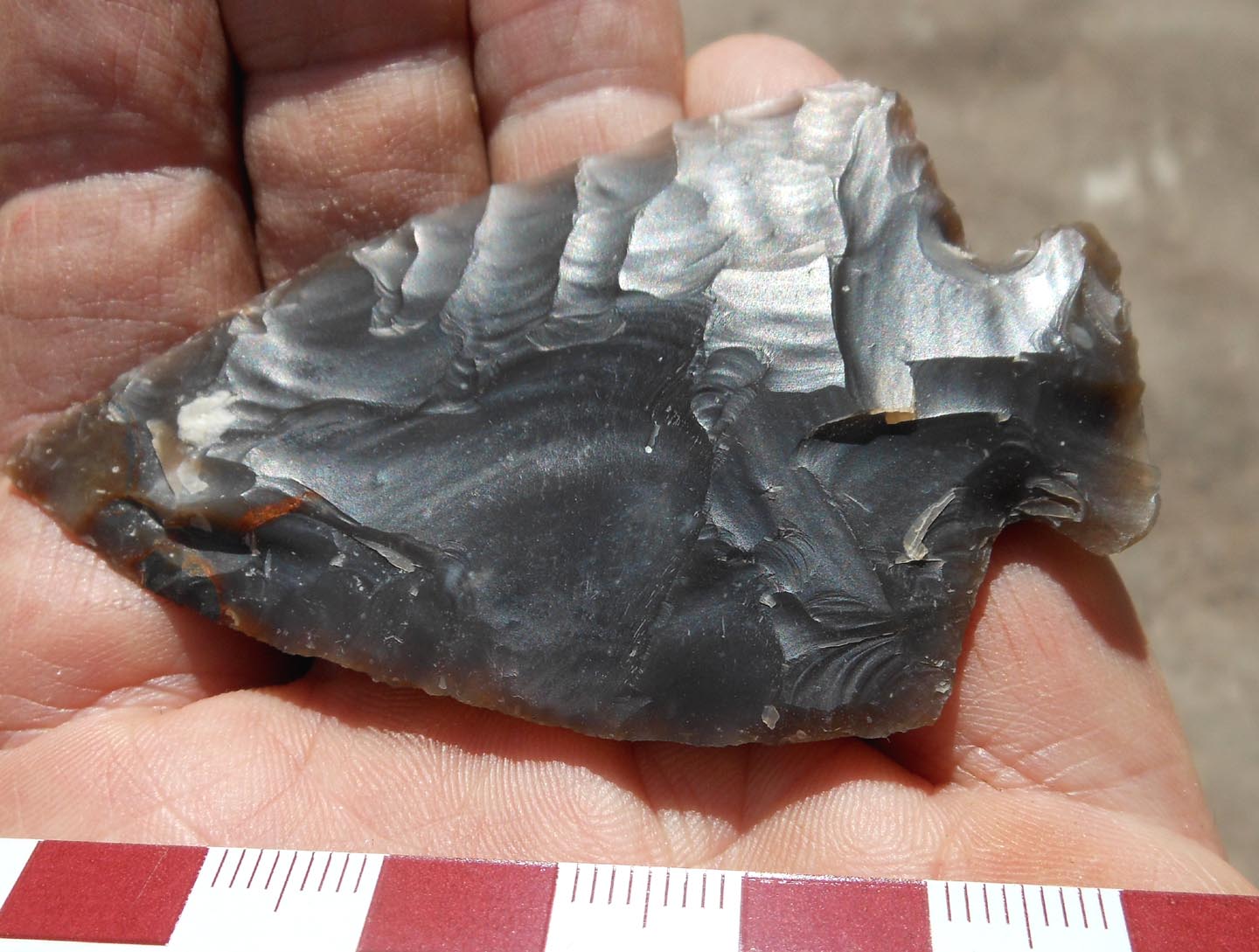 This flattened slab of flint (above, at left), roughly 20 cm in diameter, is a good example of the form of chert (fine-grained, colloidal silica) found in the Cretaceous Chalk of western Europe. Flint is common in the fields of the East Anglian region of southeast England (Greensmith et al., 1973; Lucy, 1999). Digital photo taken January 2008.

The shell-like (conchoidal) fracture is a characteristic feature of this rock type, explaining its suitability for knapping (shaping) into tools and weapons. It is common in cherts around the world (e.g., Wray, 1948). See also Flint as a building stone (Rock of the Month 34). In addition to flint, conchoidal fracture is commonly reported in shiny to glassy hydrocarbons, including cannel coal, shungite, jet and amber. It is reported in some volcanic rocks (some andesites, also obsidian), in siliceous weathering horizons (silcretes), and in some discrete mineral species, such as garnets and corundum.

The hardness, ability to sustain a sharp edge, and conchoidal fracture all make flint a particularly suitable raw material from which to fabricate stone tools. The photograph (above, right) shows a nice projectile point made from the figured block of flint. The point is sharp, and measures 7.5 cm long by a maximum of 4.5 cm wide, and is up to 7 mm thick. It weighs just 24.35 grams. The precursor flint nodule sat for many years beneath a tree on the driveway of my parents' home in Essex. It is a marvel to see what can be done with this material in skilled hands. The hands in question belong to Reuben LeBaron. Thanks, Reuben, for this practical demonstration in experimental archaeology!

A short list of catalogues and discussions of stone tools is given below. There is an extensive archaeological literature devoted to stone tools across much of the world, including Europe, Africa and the Middle East, Asia and the Americas. Flint and other forms of chert, volcanic rocks, quartz and other suitable raw materials are all described. Rainbird Clarke (1963) wrote a guide to the Neolithic flint mines of Grime's Graves, located in Norfolk, England, some 8 km northwest of Thetford. The prehistoric miners worked to win flint, much like our sample, from galleries driven along the bedding in the chalk host rock.

References II - A short list of articles on stone tools

Custer,JF (2001) Classification Guide for Arrowheads and Spearpoints of Eastern Pennsylvania and the Central Middle Atlantic. Pennsylvania Historical and Museum Commission, 138pp. plus 4 plates.

Hranicky,WM and Painter,F (1989) A Guide to the Identification of Virginia Projectile Points. Archaeological Society of Virginia, Spec.Publ. 17, Richmond, VA, 94pp.