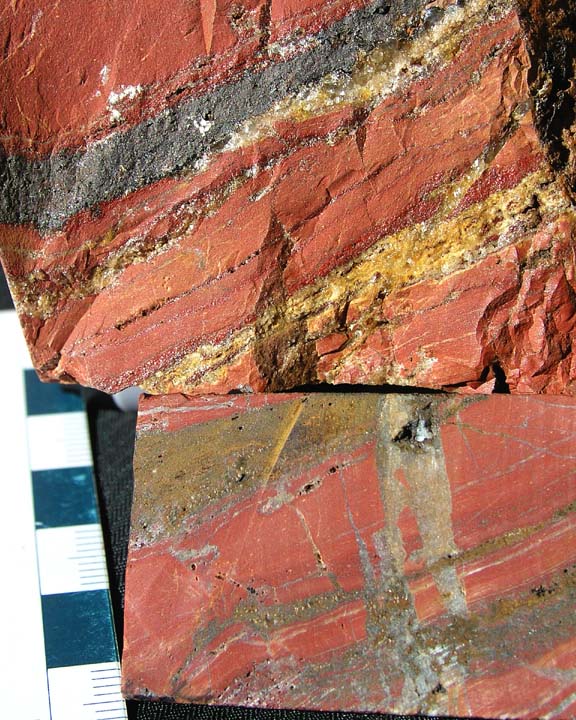 Spectacular, coarsely banded, brilliant red jasper-magnetite BIF (banded iron formation) of the Windaning Formation, in the Murchison sector of the Archean Yilgarn craton, Western Australia (Watkins and Hickman, 1990; Schiotte and Campbell, 1996). The actual site lies southeast of Meekatharra (Watkins and Hickman, 1990, p.174). The magnetite bands appear slightly porous. The red jasper bands are up to 15 mm thick, the magnetite bands up to 5 mm thick. Some magnetite appears to have been remobilized into yellowish quartz veining cutting sedimentary banding at 90°. The red, black and white jaspilitic BIF unit is up to 150 m thick in the area.

Sample collected on 11 September 1990. The sample is strongly magnetic and does not react in dilute hydrochloric acid.

The foreground displays a lightly-polished offcut slice of rock left over from thin-section preparation.

* 15% colloform banded iron oxides. May have been all magnetite originally, but now largely recrystallized, with supergene alteration to goethite. May display micron-scale banding. Goethite sometimes infills hexagonal spaces within magnetite, perhaps pseudomorphous after traces of early prismatic quartz. Goethite bands are up to 1.5 mm thick, and comprise 6% of the rock (40% of the oxides).

* 15% quartz, including fine-grained syngenetic silica (5-25 µm) as bands and lenticles within the primary sedimentary layering of the rock. Cut by at least 2-3 generations of quartz veining, the latest veinlets by far the coarsest, with strained quartz, very turbid with trails of abundant fluid inclusions, some with gas bubbles, up to 5 µm wide.

Primary sedimentary layering is marked by thin layers and lenticles of fine-grained silica, some of which occur in oxide (magnetite) -rich bands. The lamination is cut by at least two sets of thin quartz veinlets, width to 250 µm, grain size to 100 µm. Colloform goethite development truncates early veinlets, and represents supergene bedding -parallel solution and redeposition of the Fe content of the BIF. It is post-dated only by the late coarse quartz veining (width and grain size an order of magnitude larger than the early veinlets), filling brittle fractures normal to the original bedding.

See also sample 1278, a chert breccia from another locality in the Windaning Formation.