from the Kipawa alkaline complex, Quebec

Agrellite (a fluosilicate of sodium and calcium) and eudialyte are two rare minerals, which here form virtually 100 percent of an extremely unusual, coarse-grained rock from the Kipawa mineral locality in Quebec, Canada. The agrellite in this sample takes the form of curved prisms with pearly to subvitreous lustre, white with a pale brownish hue. It encloses a coarse crystal of wine-red eudialyte. Agrellite was first described at Kipawa, its type locality, while eudialyte, a complex zirconium silicate, is widespread in certain alkaline igneous provinces around the world, notably the Gardar suite of southwest Greenland, and the Kola peninsula of northern Russia.

It is extremely unusual for a mineral described in the past fifty years to take a form larger than "micromount", mm-scale crystals. Thus it is very notable that agrellite is, however seldom, demonstrably a "rock-forming mineral", a term generally associated with the most-abundant minerals and mineral families, such as quartz, calcite, feldspars, pyroxenes and micas.

The Kipawa mineral locality is located in a long, thin, deformed alkaline complex within the Grenville province of the Superior craton. Mineralization in Y and Zr minerals is coincident with a radiometric anomaly and discontinuous Y and Zr soil anomalies (Allan, 1992). The complex has an extremely attenuated, sheet-like geometry (Currie and Gittins, 1992).

Gittins et al. (1976) provided the first description of agrellite, noting that Kipawa, like the Red Wine complex in Labrador, is a rare example of metamorphosed agpaitic alkaline rocks. The agrellite occurs at Kipawa in crystals up to 100 mm long. It occurs in pegmatitic lenses and pods and mafic gneisses. The pegmatitic pods probably formed during anatectic melting during amphibolite facies regional metamorphism of the alkaline complex. As is normal with such igneous rocks, there are many associated minerals, including albite and microcline, arfvedsonite, aegirine-augite, and sometimes eudialyte and/or nepheline. Minor phases include hiortdahlite, mosandrite, vlasovite, britholite, calcite, fluorite, zircon, clinohumite and norbergite. The crystal structure was further described by Ghose and Wan (1979). Agrellite will fluoresce, more strongly in short-wave than long-wave ultraviolet light (my small 385-nm LW UV light does not excite appreciable fluorescence in this sample, cf. scapolite). Agrellite has subsequently been found elsewhere, e.g., in the Wausau complex of Wisconsin (Medaris et al., 2007). 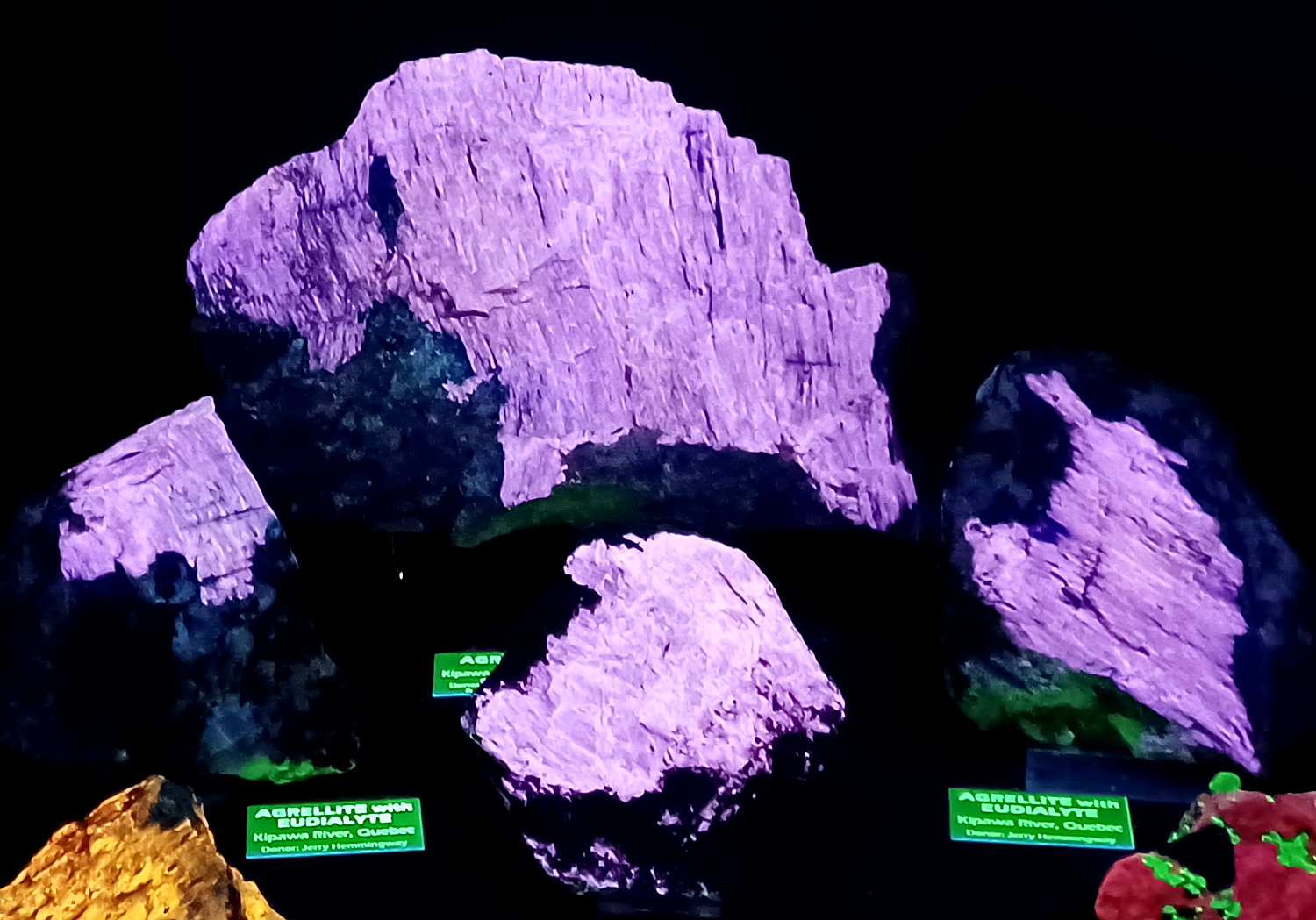 Fig. 2. Strong mauve fluorescence in coarse agrellite from Kipawa, seen under intense medium-wave ultraviolet light. These remarkably large samples are in the excellent Bancroft Gem & Mineral Club Museum in downtown Bancroft, Ontario: the extensive exhibits are well worth a visit!!

Stewart Olof Agrell (1913-1996) was a distinct presence in the Department of Mineralogy and Petrology at Cambridge, when I first met him in 1977. I initially found him slightly intimidating, but soon came to have great respect for him, and listened carefully whenever I sought his advice on mineralogical aspects of my research. He had a long and distinguished career, as indicated by the following selection of his papers, most published over a 40-year span, with additional "outliers" for a further two decades, from 1939 to 1999. The son of a Swedish father and English mother, he entered Cambridge in 1932 and obtained a PhD in 1938. After a spell at Manchester University, he was appointed lecturer and museum curator at Cambridge in 1949, and Cambridge remained his base for the rest of his life (Chinner, 1997; see also a Wikipedia entry on Agrell). The Cambridge museum catalogue of 60,000 specimens, handed to him by Tilley in 1949, grew to over 150,000 by the time of his retirement in 1980 (Chinner, 1997). I remember the phenomenal thin-section collection, to which my own research eventually made a minuscule contribution (with one hand specimen associated with each thin section).

Agrell's work covered many aspects of igneous and metamorphic petrology. Early work, on tourmaline-rich contact-metamorphic aureoles in northern Cornwall, southwest England (Agrell, 1939, 1940), was followed by later work on marbles in northwest Scotland, wherein were discovered three new calcium silicate minerals (kilchoanite, dellaite and rustumite: Agrell, 1965). The first of these is named for the hamlet of Kilchoan, on the southern shore of the Ardnamurchan peninsula in Argyllshire, type locality of these three minerals. Further work, with Mike Bown and Duncan McKie, included the description of deerite, howieite and zussmanite in Franciscan blueschists in California. The theme of thermal metamorphism continued to the end of his career, with some interesting studies of skarns (e.g., Agrell and Charnley, 1987; Agrell et al., 1999). This materials-science theme of unusual phases extended also to industrial products such as slags, providing fruther insights into natural minerals (e.g., Barber and Agrell, 1994).

In addition to fine-grained rocks, Agrell was attracted to meteorites. These fields present some common challenges, and so he was fortunate to find in Cambridge colleagues who could share in the development of new analytical techniques, which he could employ to good effect. Chief of these long-term friends was physicist J.V.P. (Jim) Long (1926-2003), whose distinguished career in the invention and perfection of electron- and ion-beam methods of in-situ analysis was remarkable in itself (Reed, 2003). An early example was electron microprobe analysis of the Fe-Ti alloys that form the bulk of iron meteorites (Agrell et al., 1963). Next came cathodoluminescence (Long and Agrell, 1965), a handy means of mineral characterization, particularly in carbonate rocks. Before long, Agrell was fascinated with samples even rarer than the meteorites: the Moon rocks returned by the Apollo missions. In 1969, Agrell and Long were designated principal investigators by NASA, for analysis of Apollo 11 lunar samples. Addition of an energy- dispersive x-ray detector to the `Mark 2' instrument circa 1970 generated the first quantitative EDS microprobe in the UK, which was used until 1989 (Reed, 2003), an early use being the analysis of minerals in the Apollo 11 samples (Agrell et al., 1970). Later, Agrell was one of 47 collaborators who studied the Apollo 16 returns (Apollo 16 Preliminary Examination Team, 1973). Further contributions included description of carbides in iron meteorites, with Ed Scott, who went on to become an eminent meteoriticist with particular expertise in irons (Scott and Agrell, 1971); and the recognition of wadsleyite, a new polymorph of olivine, from the Peace River chondrite, a meteorite from Alberta (Price et al., 1983). The diffusion-induced M-shaped compositional pattern across taenite lamellae in meteoritic nickel-iron alloys has been described as the "Agrell effect" (e.g., McCoy et al., 1997; Ruzicka et al., 1999), cross-sections displaying the "Agrell depletion" of Ni in kamacite adjacent to the Ni-rich phase, taenite.

The honour of a mineral named for him came from a frequent visitor to Cambridge, Prof. John Gittins from Toronto (Horvath, 2003), who spent many a night at the microprobe lab run by Jim Long, fellow physicist Stephen Reed, and Norman Charnley. Such recognition was soon returned to Gittins himself with another Kipawa mineral, the calcium zirconium silicate gittinsite (Ansell et al., 1980).

STUART AGRELL and his LEGACY