The snow goose is the first species profiled in the pages of the second edition of the Atlas of the Breeding Birds of Ontario (Cadman et al., 2007, pp.56-57). Confirmed breeding areas in the province form a necklace of sites along the near-Arctic north, the shores of Hudson's Bay and northwest James Bay. It is said to be the most abundant goose in the world --- but certainly not in southern Ontario (where that other common species, the Canada goose, is king)! The birds form lifelong pairs when up north, and nest in the tundra within 10 km of the coast. The snow goose may have been expanding in numbers since the mid-20th century, perhaps thanks in part to more winter feeding opportunities, due to agricultural developments in Louisiana and Texas (Cadman et al., 1987, p.510).

In Trent Hills, sightings are rare. Starting in the immediate past, and working backwards:

6, 5. Two sightings were made of an individual beside the Trent canal in Campbellford, on 14 and 16 November 2021. The snow goose was an adult white morph, slightly smaller than adjacent Canada geese. Why it was separate from its mates is unknown, but it apparently chose safety in numbers, hanging out with some 220 of the slightly-larger Canada geese on the earlier date, and 250 two days later. The flock had moved only 1.5 km downstream in 48 hours - evidently in no hurry to depart for points south. Sighting with photographic evidence: see Figs. 1-2.

3, 2. On 21 May 2000, in the evening, in Campbellford, a pair of Canada geese were noted in company with a white goose and a pair of bluish-grey fluffy goslings ("white-Canada" hybrids?), forming a close group, paddling up and down the Trent canal near the west bank. The white goose had orange legs and bill, was all-white, and had an upthrust rump, making a distinctly different shape to its adult (Canada goose) associates - a snow goose, or the domestic goose (Anser domesticus)? The shape indicates the fat on the rear of a domestic goose, so this possible "snow goose" sighting is rejected. Hybrids of Canada goose and domestic geese (e.g., greylag goose) are well-documented. This same pair may have been seen earlier,by the canal, on 11 January, where they were considered a Canada goose-domestic goose pair.

1. On 28 March 1999, a pair of geese, one snow goose with one Canada goose, were noted swimming side- by- side on the Trent river at Lion's park in Campbellford. Given the observation the following year (2, above) it might be that this was a "wild", escaped domestic goose, the same as the individual seen a year later?

The year before, on Sunday 27 September 1998, at Presqu'ile park, one snow goose was seen within a flock of several dozen Canada goose, on a birding trip hosted by Steve LaForest. 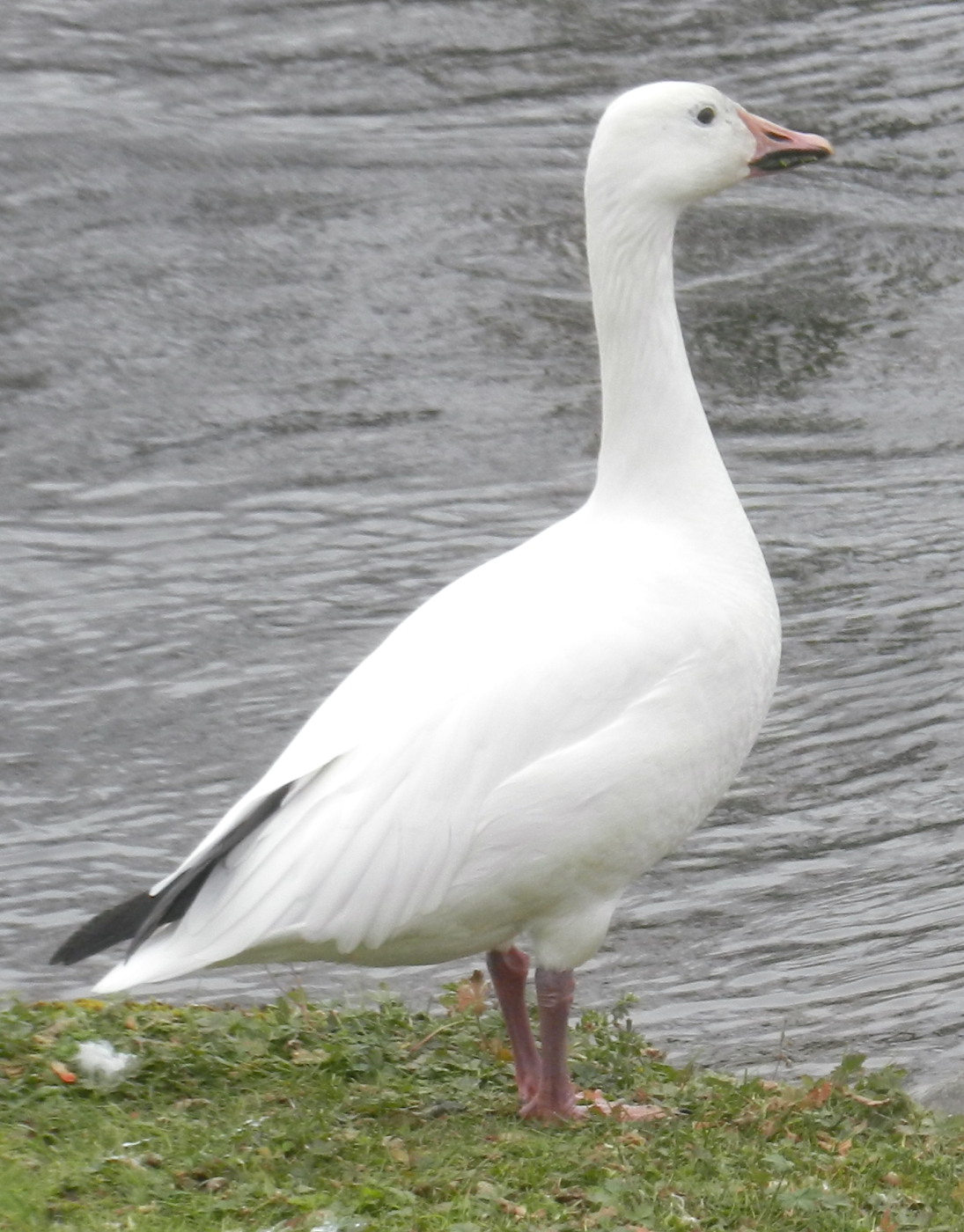 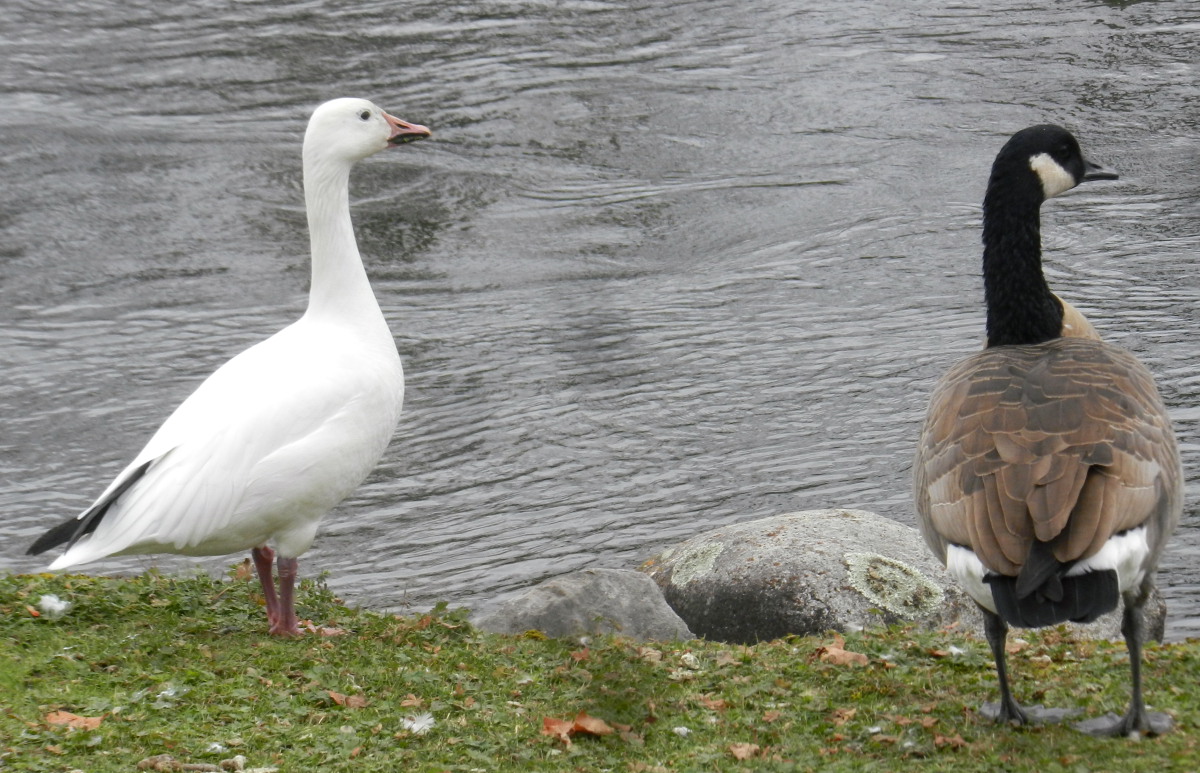 Figures 1-2. Two images from the same photo taken beside the Trent canal on 14 November 2021. It is a white morph, a "Snow". The snow goose stayed within the tight flock of Canada geese, but appeared only marginally tolerated by its immediate neighbours: if it got much closer than in the right-hand image, it would be scolded by its slightly larger "cousin".

Given the possibility of confusion with escaped domestic geese, it may be that only the September sighting at Presqu'ile and the documented sightings in November 2021 at Campbellford can be taken as certain. At Presqu'ile, only 8 spring (March-May) records of snow goose are reported between 1956 to 1990, and just 5 autumn sightings, late September to late November (LaForest, 1993, pp.57-58). It has been suggested that many snow geese may be missed because, like many hawks in migration, they may pass over at high altitude and be hard to identify.

In New York state (Levine, 1998, pp.142-143) the migrating and wintering snow goose may appear in both light (Snow) and dark (Blue) morphs, on occasion in great numbers, especially on the Atlantic coast. The snow goose was first noted in the wider Kingston region in 1926, but became more common, an annual visitor, from the late 1960s onward. "Frequently, the Snows are mixed in with Canada Geese and are often found feeding on Wolfe Island" (Weir, 1989, pp.71-72). " The majority of sightings involve white morphs". In Peterborough county, to the northwest of us, the snow goose is seen on migration, usually in flight, and more in spring than in autumn (Sadler, 1983, pp.42-43).