The turkey vulture is more-often-than-not seen from country roads, hovering and tilting into the wind, wing tips lifted in characteristic dihedral profile, or circling in groups on updrafts. Often an individual or pair is seen, but small groups of 3 to 7 are not unusual, and larger numbers are occasionally seen, especially later in the year. The bird is generally seen in the region from April to late October (extremes 07 March to 21 November). Rare late sightings include a pair seen on the cool and windy 21 November 1998, and perhaps an unconfirmed glimpse on the same date in 2005. Sightings may often be made for maybe two weeks before or after our local "vulture summer", in places a short distance south and west of the township, such as Codrington or Castleton. The frequency of road sightings is such that the field notes are sometimes ambiguous in their exact location: whether in Seymour or (various excluded sightings) in adjacent townships. The easiest and most spectacular place to view nesting turkey vultures in the region is the overlook to the old Marmoraton iron mine, accessible from the south side of Highway 7 just east of Marmora. Large numbers also occur over rural dumps (landfill sites), as on the 5th Line West of Seymour, where a record 26 were spotted circling on 10 October 2007. This bird is a very useful scavanger, and a pretty tough customer! I once saw one in a tree in an ice storm, stoic and motionless, wings encased in a thin sheet of ice. Miraculously, the bird was gone the following morning, not frozen stiff on the lawn beneath! Out-of-season, of course, the bird can be found "down south", e.g., as an abundant rural inhabitant of, for example, Granma and Holguin provinces in eastern Cuba in January.

Forty years ago, this vulture was recorded as a rare spring migrant (early April to late May) and uncommon fall migrant (mid-September to late October) at Presqu'ile provincial park, roughly 40 km to the south (LaForest, 1993, p.98). Joe Arengi saw a pair of turkey vultures from highway 401 west of Brighton on 18 March 1999, an early sighting for the region. However, the species is perhaps more common now than in the 1980s and 1990s.... The turkey vulture was very rare in Ontario in the 19th century, but expanded widely across the region since the 1920s (Weir, 1989, pp.113-114) and there has been a trend to earlier arrivals across the wider Kingston region. Levine (1998, pp.139-140) notes to same migrations and general range expansion through New York state in the past 100 years. One possible explanation for the expanded range is the rise in roadkill along highways since the days of the Model-T Ford.

The turkey vulture ("buzzard" in common parlance) is a common summer resident in northern Peterborough county, to the northwest, generally noted between 04 March and 04 September, with rare winter records in January and February, and one on 24 November 1962 (Sadler, 1983, p.57).

The Ontario breeding bird atlases (Cadman et al., 1987, pp.106-107; 2007, pp.166-167) note that this bird is easy to identify at a distance, but that nests are commonly hard to find. The bird prefers agricultural areas with scattered forest or woodlots, though it will also nest on cliffs. The warmer southwest of Ontario sees the highest density, but it is found throughout southern Ontario and the more southerly span of northwest Ontario, along the borders of Minnesota and southern Manitoba. 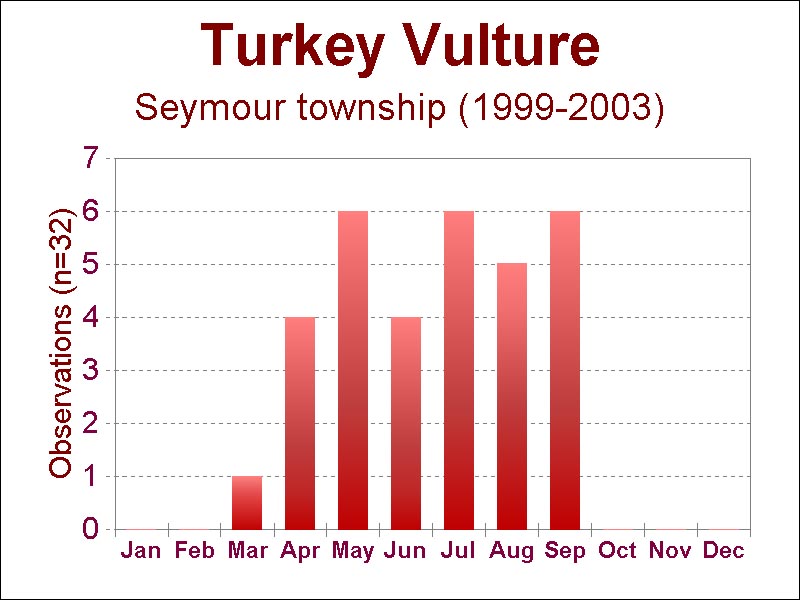 Above is the preliminary annual distribution of sightings, through 2003, while
here is the complete 22-year (1999-2020) monthly data summary for the turkey vulture (229-kb pdf file).