Based on 17 observations in Seymour township, Northumberland county, southeast Ontario, 1999-2003.

North American wood warblers are favourites at seasonal birding "hot spots" such as Point Pelee, Rondeau and Presqu'ile parks along the northern shores of Lakes Erie and Ontario. They are seen relatively seldom in the woods and hedgerows of our normal "beat" in Seymour township. This is perhaps because, firstly, the aforementioned places host migratory concentrations of both birds and birders! Secondly, any warblers residing in the township are probably breeding during their short summer season, and maintaining a low profile. Only six warbler species have been spotted here in the past six springs, and this one, the yellow warbler, has been seen for little over two months, from 11 May to 18 July. At the time of writing, yellow warblers have been sighted on two days thus far in May, 2004.

It is a common migrant and summer resident at Presqu'ile provincial park, roughly 40 km to the south, from early May to early September (LaForest, 1993, pp.310-312). It is the most common nesting warbler in the park. Seen as early as 23 April, it starts to leave the park in mid-July, with a peak in mid-August, the latest individuals dallying until 17-20 September. The bird is also common in Peterborough county, to the northwest, as early as 25 April and as late as 07 September (Sadler, 1983, p.132). It is a common victim of the parasitical brown-headed cowbird. 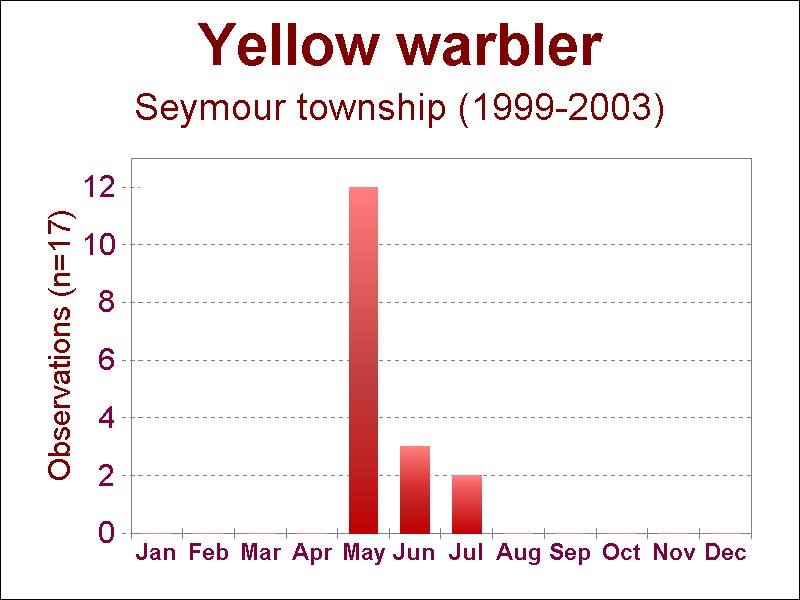